Archaeology of the Lakes Basin

The story of Oregon's past begins in the Lakes Basin. The oldest archaeological site in the state is Fort Rock Cave, located at the eastern edge of the Deschutes National Forest north of Silver Lake. Carbon dating of charcoal from an ancient hearth in the cave implies that people were present in Oregon more than 13,000 years ago. Along with the remains of a cook fire and chipped stone tools, archaeologists discovered a sandal made of sagebrush bark estimated to be 13,200 years old. These artifacts are thought to be the earliest evidence of human activity in Oregon, and perhaps in all of western North America. 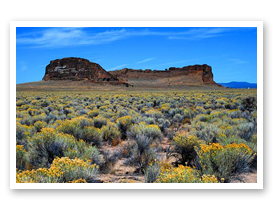 These first Oregonians lived at the end of Pleistocene period when glaciers still covered much of the mountains in eastern Oregon, including Steens Mountain. The desert basins of southeast Oregon were filled with vast lakes that have now receded into small pockets. Today, Oregon residents know them as Summer Lake, Lake Abert, Malheur Lake, and the chain of lakes in Warner Valley. During this time, many of the animal species living today populated the area. Several species, including the giant ground sloth, giant bison, camel, and horse, are now extinct.

The passage of time is often reflected in human cultures as changes in tools and other objects. These changes are observed in the weapons of early Oregonians, particularly in spear points. The Clovis fluted point, one of the earliest types of spear points in North America, has been found at several locations in Oregon. One point, found in the Glass Buttes area in central Oregon, remarkably reflects two origins -- viewed from one face, the point is an excellent example of the Clovis type. From another angle, the point is an example of an entirely different type, called Windust. The integration of both these types in one point suggests that the two technologies overlapped in both space and time, and the maker was familiar with both.

Archaeologists have been able to infer that the landscape and climate in eastern Oregon was much different than it is today. Ancient tools, animal bones, and campfires found in another important archaeological site, Connley Caves, ten miles south of Fort Rock Cave, helped scientists draw these conclusions. In the caves, a layer of ash from the cataclysmic eruption of Mount Mazama was dated to 7,000 years ago. The caldera formed by the eruption is now occupied by Crater Lake. Under this ash, archaeologists uncovered a large number of projectile points, knives, drills, and bones from food animals. These items ranged from 11,200 to 3,140 years old. The wood in the campfire was pine, a species that lives in a cooler climate. Today, the forest surrounding Connley Caves is heat-loving juniper. The bones found in the cave were from a small, rabbit-like mammal called a pika, which today inhabits only cool, mountainous uplands. Bones of waterbirds were also present, suggesting that Paulina Marsh, which exists today several miles from the cave, must have once been much more extensive. Overall, these artifacts suggest that that the climate in eastern Oregon was once much cooler and wetter than it is today.

The University of Oregon operates the Northern Great Basin Field School. During certain summers, burgeoning archaeologists from universities around the state participate in examining the Paisley Cave archaeological site north of Paisley. The most recent excavations were conducted in four caves and focused on recovering and dating cultural materials and animal remains. Excavations have revealed that occupations of the cave were limited to brief stays, and the site was therefore not a long-term camp. Researchers were able to draw this conclusion based on the proportion of intact tools to debitage, or pieces of chipped stone that is the by-product in the making of projectile points. A high proportion of points to debitage were found in the cave, suggesting that occupants made the tools elsewhere, perhaps in a more permanent camp, and brought the points to the Paisley Camp after their completion.

One challenge faced by the team was determining whether materials found together in the caves were actually related or moved together at a later time due to a disturbance. For example, researchers commonly found large mammal bones together with human artifacts. However, there is also evidence that large animals and birds of prey used the caves during periods when humans were absent. Determining the associations between the human artifacts and the large animal bones is an important task for this site. Future research will be conducted to determine whether people were involved in the deposition of these bones in the caves.

In 2015, the University of Oregon Archaeological Field School will run two simultaneous field schools, one at Rimrock Draw Rockshelter and another at the Connley Caves.