Unfortunately, most of Oregon's wetlands have been degraded or altered by some form of human activity over the past 100 to 150 years. It is difficult to find a wetland that does not have signs of disturbance, especially in urban areas of the state. In order to set goals, you first need to determine the impact of past actions on the site, and from there assess its rehabilitation potential. Knowing how a wetland became degraded, and to what extent, is critical for determining how best to restore it. Among the chief indicators of disturbance are hydrologic alterations, soil impacts and invasive plants.

Hydrologic Alterations. If a wetlands hydrology - the amount and flow of water, at the surface or under the ground, and the duration of soil saturation - is altered, the wetlands plant and animal communities will change from their natural composition. Disconnecting rivers from their floodplains, and burying drain tiles to remove surface and groundwater on cultivated lands are among the actions that alter the hydrology of wetlands. Channelization, water impoundment and ditching can also have significant long-term negative impacts on an entire wetland. In urban areas, the addition of stormwater runoff from streets and parking lots, yards, and roofs may degrade a water body or wetland. Storm sewers sometimes lead directly into lakes, rivers, or wetlands, dumping excess water, chemicals, fertilizers, heavy metals, and other hazardous substances into these ecosystems. 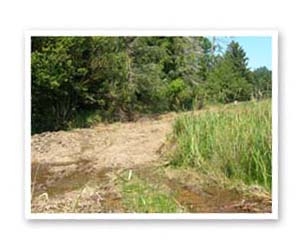 Soil Impacts. Cultivation, subsidence, erosion, soil compaction due to cattle grazing, and even driving heavy machinery over a wetland can degrade its soils, as can placement of pipelines, sewer lines or underground cables. Once the wetland sod has been broken, invasive species can get a foothold and over time out-compete the less aggressive native plants. Siltation (the accumulation of sediments) causes serious damage to wetland quality, especially in agricultural landscapes. Eroded soil and sediments from adjacent agriculture lands can carry nutrients from manure and fertilizers, which may lead to changes in a wetlands vegetation and wildlife habitat. Reed canary grass and other invasive species may encroach on a wetland that has trapped silt from adjoining farm fields.

Disturbance Indicator Plants. Disturbed wetlands lose plant diversity and are typically dominated by only a few species. Several invasive plant species frequently appear in the majority of Oregon's disturbed wetlands. Becoming familiar with these species will help you determine the extent of disturbance. Reed canary grass, purple loosestrife, knotweed and even cattails are extremely invasive plants that can grow under a number of conditions. Their presence indicates some disturbance in the distant or recent past. In many wetlands where the water table has been lowered and where fire has been suppressed such as shallow marshes, sedge meadows, wet meadows, and wet prairies native and non-native shrubs and trees begin to establish themselves. Black hawthorn is one typical aggressive non-native shrub. Among native shrubs and trees that can dominate disturbed wetlands are red osier dogwood, red alder, Oregon ash and black cottonwood.

Hydrologic and soil alterations, and the spread of invasive non-native plants, modify the quality of a wetland and its functional values, not to mention its aesthetic appeal. Biological diversity the richness of plant and animal species in an area can be seriously reduced through disturbance. A good wetland project attempts to restore the original hydrology, and native plants and animals to the site to the fullest extent possible.