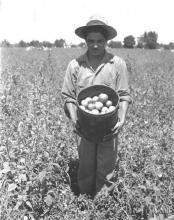 The 102 photographs in this collection document the activities of Oregon's Bracero workers - their cultivation and harvesting work in the fields and orchards as well as the farm labor camps in which they lived. Most of the photographs were taken by Oregon State College Extension staff members as part of a larger effort to document the various groups that contributed to alleviate the state's severe shortage of farm labor. Extension photographers included John Burtner, Fred Shideler, Robert Fowler, and Harry Whitten. Works by commercial photographers Bus Howdyshell of Pendleton and Maurice Hodge of Portland are also included in the collection.