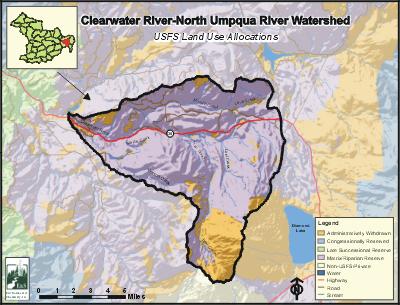 Topography within the Clearwater River-North Umpqua River Watershed is a mix of steep and gently sloping topography. Elevations range from 8,368 feet at Mount Bailey on the southeastern edge of the watershed to 2,400 feet where the Clearwater River empties into The North Umpqua River. Other high-elevation areas include Pig Iron Mountain (5,400') and Trap Mountain (6,133'). Streams within the watershed deeply dissect the landscape. Watson Falls, created where Watson Creek tumbles over the edge of a thick lava flow, is 272 feet tall, the tallest waterfall in southern Oregon.

Alpine glaciation has sculpted the higher elevations in the watershed. Residual glacial debris formed the eastern edge of the watershed against the Diamond Lake Watershed. Though the eruption of Mount Mazama (Crater Lake Caldera) about 7,000 years ago did not result in extensive deposits of pumice and ash within the watershed, remnants of water-deposited pumice remain in some of the lower valleys.

The most common land use in the Clearwater River-North Umpqua River Watershed is forestry, with nearly the entire land base used for public forestry. A power plant, water canal, and other PacifiCorp hydropower facilities occupy a small portion of the watershed. Land ownership is solely public, with administration by the U.S. Forest Service. Most of the watershed is managed as matrix lands. Matrix lands are those available for timber management at varying levels. A small portion of the watershed in the southern tip is managed as the Oregon Cascades Recreation Area.

Two tributaries of Clearwater Creek are on the final 2002 ODEQ 303(d) list for summer stream temperature.

Fish habitat conditions in the watershed range from fair to high quality. Low water temperatures are thought to limit production throughout much of the system. Water flow in the Clearwater River below Stump Lake has been reduced by hydroelectric water diversion. Gravel and woody material recruitment and the stream velocity to scour pools have been reduced in this area.

Timber harvest and road construction in riparian areas and past stream clean out have reduced recruitable and in-stream large woody debris, increased sediment, and reduced pools in some stream segments.