It is a challenge that has long been taken up by Oregonians who value the coast. The beginning of coastal land use law was the 1913 declaration by Governor Oswald West that the Oregon beaches should be designated as a public highway, guaranteeing public access. The Legislative Assembly concurred, and included in the law all ocean shore tidelands from the Columbia River south to the California state line. In 1925 the Legislative Assembly authorized purchasing land beyond 300 feet of the roadway for "parks, parking places, camp sites, public squares and recreation grounds." 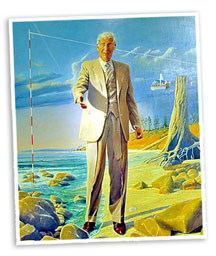 In 1967 Governor Tom McCall assisted in the passage of the Oregon Beach Bill to maintain Wests vision in keeping Oregon's beaches open to the public. The Oregon Beach Bill decreed that all land within sixteen vertical feet of the average low tide mark belongs to the people of Oregon and guarantees that the public has free and uninterrupted use of the beaches along Oregon's 363 miles of coastline. A state easement exists up to the line of vegetation. Only one other state, Hawaii, guarantees public access from the surf line to the vegetation line. The Beach Bill also directed that the ocean shore be administered as a state recreation area.

The result was Senate Bill 100, which created the Land Conservation and Development Commission (LCDC) and directed it to establish new statewide planning goals and guidelines. The bill required that every Oregon city and county prepare a comprehensive plan in accordance with these new state goals.