The ocean's energy, aided by tides, rivers, rain, and currents, can transform coastal landscapes with unexpected speed. The coast is also seismically active and subject to infrequent but severe catastrophic earthquakes and tsunamis that have flooded low lying areas. Development in hazardous areas is discouraged or restricted under statewide planning Goals 7, 17 and 18. Nonetheless, the demand for view and waterfront property creates strong pressure for new development in some hazardous areas.

In an average square mile of Coast Range forests, there are over 250 headwalls, or areas of deposited sediments that are the result of a past landslide and other sediments that fill in behind it. Landslides will occur again in these same places, usually as a result of major storms such as the ones in 1996 and 2007. 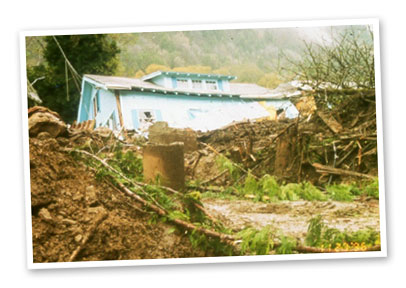 The situation began millions of years ago when what is now the Coast Range was the ocean floor mostly sandstone with inter-bedded siltstone and mudstone. If you fast-forward millions of years, those ocean floor sediments have been uplifted by geologic forces to form steep Coast Range mountains that are typified by soils of varying depth, sometimes as shallow as only a few feet deep. Water soaks through the soils, hits a less permeable layer and runs along it until it surfaces, forming natural seeps where water accumulates. Then given the steepness of the land the heavy, saturated soil slides.

The rainstorm that soaked the Pacific Northwest in early December 2007 caused major flooding, more than a dozen deaths and once again raised questions about the ability of land use policy, especially regarding clear cutting, to prevent landslides.

Erosion is a natural process that becomes a hazard when human development or public safety is threatened. Beaches, sand spits, dunes, and bluffs are constantly eroded by waves, currents, tides, and storms. Changes may be gradual over a season or many years. Changes may also be drastic, occurring during the course of a single storm event. Erosion may be caused by large waves, storm surges, rip cell embayments, high winds, rain, runoff, flooding, or increased water levels and ocean conditions caused by periodic El Nios. Coastal dunes and bluffs comprised of uplifted marine terrace deposits are especially vulnerable to chronic and catastrophic erosion. Coastal erosion processes create special challenges for people living near the ocean, requiring thoughtful planning in order to minimize the potential dangers to life and property. Attempts to stabilize the shoreline or beach are often futile, because the forces that shape the coast are persistent and powerful.

Land-use management practices and non-structural solutions to problems of erosion and flooding are preferred to structural solutions. However, shore protection structures are sometimes necessary. These water and erosion control structures, whether located in the waterways or on shorelands above ordinary high water marks, include jetties, bulkheads, seawalls, and similar structures, as well as fill. They are designed to minimize adverse impacts on water currents, erosion, and accretion patterns. Comprehensive plans address these issues by requiring review of each proposed development in identified hazard areas.