The Elk Creek fifth-field watershed is located in the northwestern portion of the Umpqua Basin. The watershed is approximately 187,000 acres, stretching a maximum of 17 miles north to south and 22 miles east to west. Elk Creek flows northward from headwaters in the east near Robinson Ridge to the confluence with Salt Creek, then turns and flows westward to the confluence of the Umpqua River at the town of Elkton. 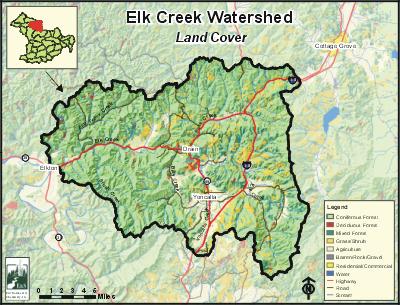 Elevations in the Elk Creek Watershed range from 75 feet near the confluence of Elk Creek and the Umpqua River to 2,657 feet at Ben More Mountain near the southeastern tip of the watershed. The uplands of the watershed are fairly steep with stream channels that dissect the landscape. The Elk Creek valley broadens considerably around Putnam Valley and Yoncalla Valley.

The most common land use in the Elk Creek Watershed is forestry, accounting for 81% of the watershed. Agriculture constitutes about 9% of the land use, occurring in the floodplains and valleys of Elk Creek. Another 9% of the watershed is composed of grassland and brush, used predominantly for grazing. All other land uses, including commercial/industrial and residential account for about 1% of the watershed. Approximately three-quarters (76%) of the Elk Creek Watershed is privately owned, and about a quarter (24%) is publicly owned, nearly all of which is administered by the Bureau of Land Management (BLM).

There are two population centers in the watershed, Drain and Yoncalla, both of which are on Highway 99. Interstate 5 (I-5) runs north to south through the eastern portion of the watershed, and Highway 38 follows Elk Creek westward from Drain to Elkton. 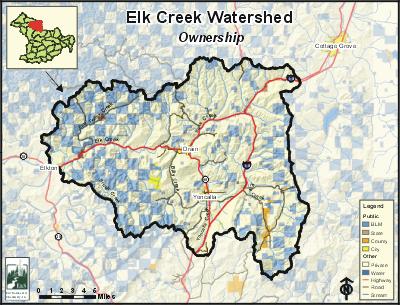 The Elk Creek Watershed is home to many fish species, including four salmonids. Fall chinook spawn in Elk Creek upstream as far as Drain, and in the lower reaches of Big Tom Folley Creek and Brush Creek. Winter steelhead and coho spawn in all of the watershed's major tributaries, including Big Tom Folley Creek, Brush Creek, Pass Creek, Billy Creek and Yoncalla Creek. The steeper tributary streams at the upper elevations of the watershed provide habitat for cutthroat trout. Non-native species including smallmouth bass, brown bullhead, and bluegill are also found in the Elk Creek Watershed.

According to the BLM watershed analysis conducted for Elk Creek in 2004, seven culverts have been replaced since 1995, either because they were old and failing or because they were blocking fish passage. Approximately 23 culverts on BLM, county, or state roads were identified as restricting access to anadromous fish. Funding was received to replace three of these culverts in 2004. Overall, it was estimated that 34 miles of potential fish habitat on third-order or larger streams were inaccessible because of culverts. There are no known dams that block fish passage in the Elk Creek Watershed.

Elk Creek, Brush Creek, Big Tom Folley Creek, and the North Fork of Big Tom Folley Creek were placed on the Oregon 303(d) water quality-limited list in 2002 for violating water quality standards. Elk Creek was listed for water temperature (in the summer), dissolved oxygen, and fecal coliform bacteria, whereas the others were listed only for water temperature. The Oregon Department of Environmental Quality (ODEQ) is currently completing a Total Maximum Daily Load (TMDL) analysis for the Umpqua Basin, including Elk Creek, which will provide guidance for improving water quality conditions.

Aquatic habitat surveys conducted by Oregon Department of Fish and Wildlife indicate that most of the tributaries in the Elk Creek watershed are lacking in large woody debris. In addition, the majority of trees near streams (55%) are younger than 80 years old. According to the BLM watershed analysis, 38% of trees within 200 feet of streams on BLM lands were between 31 and 80 years old, and 17% were less than 30 years old. Consequently, there is also a lack of large trees that could potentially contribute large woody debris to the streams in the near future.