Fanning the Flames: Restoring the Fire Regime in the Great Basin

The peculiar nature of fire is that it is both natural and cultural.  -- Steven Pyne

Fire has played an important role in the development of most native plant communities in the Lakes Basin. But since European settlement, the frequency and intensity of wildfire has changed, resulting in serious consequences for the region's people and wildlife. "A common theme is that there is either too much fire or not enough," says Jeff Rose, a fire ecologist for the U.S. Bureau of Land Management (BLM) in Burns, Oregon. This dichotomy stems from the direct and indirect consequences of past management actions, such as fire suppression and the spread of invasive plants.

The Lakes Basin in the northwestern most part of the Great Basin is an arid landscape of terminal basins, basalt ridges and buttes. The wide range of elevations in the basin creates microclimates with different amounts of rainfall. The driest areas, called the Barren Playas and salt-desert shrublands, can have less than six inches of rainfall a year and support sparse vegetation adapted to very dry conditions. Middle elevations receive more rainfall, up to 12 inches annually. Rainfall here is plentiful enough to support sagebrush steppe ecosystems, or plant communities with an overstory of sagebrush and an understory of perennial grasses and forbs. Higher elevations may have 30 inches of rainfall a year or more and are able to support woodlands of conifers , primarily Western juniper, ponderosa pine, and Douglas-fir.

These three distinctive plant communities have different fire regimes, or cycles that vary in fire frequency and severity. Fire regimes are often classified based on the average fire return interval, or the average number of years between fire events. The driest areas in the Lakes Basin may have historically burned only once every 200 years. Because low rainfall and harsh soil conditions limit plant growth in these areas, lightening-strike fires can only spread a short distance before running out of fuel, and burn with a low intensity.

In the sagebrush steppe where rain falls more frequently, fires are also more common. Rose estimates that drier sagebrush communities burn once every 75 to 150 years. Sagebrush communities that grow in deep soil in areas that receive between 8 and 15 inches of precipitation produce more fuel, and therefore burn more frequently. In these settings, fires occur every 15 to 25 years.

Where there is enough moisture to sustain conifers such as ponderosa pine, the fire frequency is even greater, perhaps every 8 to 15 years. In these areas, dry branches and resinous conifer needles are highly flammable and encourage the spread of fire. The shrubland, sagebrush, and conifer plant communities in the basin occur in large patches of up to 100,000 acres, or in mosaics within a small area. Topography, and rainfall and elevation gradients have created a patchwork of communities that respond differently to fire. In some areas plants are recovering from a recent burn, while in others the vegetation has not burned in decades.

The Lakes Basin fire regime changed with European settlement and the resulting introduction of livestock. Grazing reduced fuel, making it more difficult for fires to catch and spread. Wetter conditions in the late 1800's may also have suppressed fires and favored the growth of woody plants.

The result of these changes is most visible in areas where sagebrush steppe borders juniper woodlands. Hillsides that once had a few, widely dispersed junipers are now covered in thick stands. In other areas, junipers have expanded down-slope onto lands once dominated by sagebrush and bunch grasses. Rick Miller, a faculty member at Oregon State University and an expert in juniper ecology, estimates that Western juniper now covers an area 10 times larger than it did 130 years ago.

Because junipers do not catch and spread fire as easily as native grasses, upland areas in eastern Oregon do not burn as frequently as they did in the past. When fires do occur in these landscapes, however, the thick juniper stands provide abundant fuel and fires burn hotter and with greater intensity than they would in sagebrush- dominated plant communities. In lower-elevation areas, however, fire is becoming more common.

In the lower-elevation sagebrush steppe ecosystems, fire history is more heavily influenced by another management challenge: invasive annual grasses. These fast-spreading non-native species, such as cheatgrass, were brought to Eastern Oregon in the late 1800s. "Some of these grasses weren't historically perceived as that great of a threat. But what we recognize now is that in addition to disrupting sagebrush-dependent ecosystems, the annual grasses have changed the frequency and intensity of wildfires," says Roger Sheley, a research ecologist for the U.S. Department of Agriculture in Burns, Oregon. Invasive annual grasses sprout earlier in the spring than native bunch grasses and complete their life cycle earlier in the summer than the native plants, making them ideal fuel for summer wildfire. 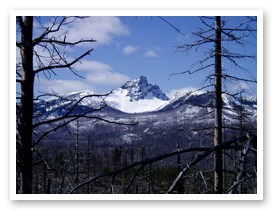 In addition, invasive grasses can grow into thick mats, providing a continuous bridge of fuel that allows fires to spread over large expanses. As these grasses expand into new territory, the area that can sustain a wildfire is also increasing, lengthening the fire season. "Areas that didn't burn very often, perhaps on a 200-year cycle"¦ are now burning every 3-5 years," says Jeff Rose.

Unfortunately, these more frequent fires result in the propagation of more invasive plants. Native plants that are adapted to less frequent fires are often lost after two or three closely-timed burns. Rose continues, "With such frequent fires, some of the salt-desert shrub species"¦just can't get a toehold in the system. Even the [native] perennial grasses are eventually crowded out by cheatgrass because they can't tolerate such frequent fires."

Large, recurrent wildfires also have a human cost: they threaten homes and infrastructure, and efforts to control them drain agency budgets. The U.S. Forest Service spent an estimated $97 million to respond to and control large wildfires in the Pacific Northwest. Those same fires in the summer of 2005 destroyed 117 houses and businesses. Wildfires also reduce the amount and length of time forage is available for livestock and wildlife, both seasonally and long term.

An Approach for the Future

Among those leading restoration efforts there is widespread recognition that the total elimination of invasive plants or a return to pre-settlement conditions is impossible. Instead, researchers are attempting to manipulate a suite of factors, such as soils, nutrients, and moisture, that influence how native plant communities respond to changing conditions and invasive plants. Paul Doesher, a forest ecology expert and professor at Oregon State University, explains this tactic: "We are trying to understand the dynamics of the invasive species in terms of how they grow and when they grow, rather than just killing them. We can kill them with sprays but then they just come back in two years."

Instead of using chemicals, scientists are turning to creative, ecologically-based techniques to conquer the invasive species. Doescher described one experiment where sugar was sprinkled over an area with both cheatgrass and native perennial grasses. The sugar became an energy source for soil microbes, which grew rapidly, using more soil nutrients and leaving less for the quick-growing cheatgrass. "The native grasses don't have the same desire for all those nutrients", says Doescher, "so that shifted the competitive balance to favor the native grasses."

This holistic approach to resolving plant-driven changes in the fire regime in the Lakes Basin provides hope for the preservation of its unique plant communities. However, it is clear that ecosystem-scale problems are not easily remedied. Sheley explains: "Traditionally we've been treating a symptom - if you had an Advil and it wore off - the pain from the toothache would come right back. It's a similar story with invasive plants - if we are going to be successful, we need to understand the causes of [the invasive plants'] success, and try to develop management strategies that alter those causes."

Fire, however, is an unpredictable tool. While it is true that fire is necessary to maintain the type of ecosystems that have traditionally existed in the Lakes Basin, it does not always produce results that managers expect. Rangeland managers like Jeff Rose who work with fire on a daily basis are quick to point out that fire is important only from the standpoint of maintaining a desirable condition - the native plant community that society wants and appreciates. Therein lies a drawback, explains Rose: "Allowing an area to burn, either through wildfire or prescribed fire, does not guarantee that native plant communities will be maintained or moved toward native plant dominance."

However, researchers are currently endeavoring to learn more about how native plants respond to wildfire in an effort to improve prescribed burn techniques. The Sagebrush Steppe Treatment Evaluation Project (SageSTEP), located in the Lakes Basin, is one organization attempting to better understand wildfire dynamics. The project's vegetation measurements will hopefully allow scientists to learn more about the types of plant communities that are likely to appear after a wildfire or management action. With more information about vegetation response to management treatments, managers may then be able to predict treatment outcomes and select a management strategy with more certainty. Through the efforts of organizations such as SageSTEP, managers can hopefully count more successes in their campaign to restore the unique landscape of the Lakes Basin.