The Fish Creek fifth-field watershed is located in the eastern portion of the Umpqua Basin. The watershed is 53,564 acres. Fish Creek, a major tributary of the North Umpqua River, empties into the river approximately one mile above Soda Springs Reservoir. Fish Creek stretches a maximum of 14 miles north to south and 12 miles east to west. 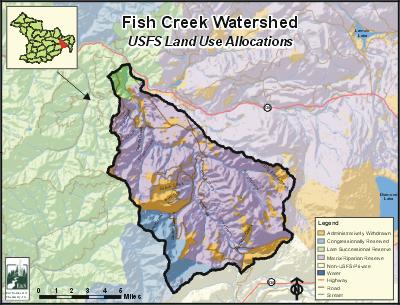 Terrain underlying the watershed was built by old volcanic events to the west and newer volcanic events from the High Cascades in the east. These newer events partially filled some of the watershed's river valleys as recently as 250,000 years ago. The watershed's weakly-dissected streams are the result of these relatively recent lava flows. Alpine glaciation sculpted the higher elevation terrain within the watershed.

The most common land use in the Fish Creek Watershed is forestry, with nearly all the land base used for public forestry. PacifiCorp has several hydroelectric facilities, including a diversion dam on Fish Creek, and a canal and flume to carry water to the Fish Creek Power Plant near Toketee.

The U.S. Forest Service administers all of the land within the watershed. Most of the land base is managed as matrix lands, with smaller portions managed as late successional reserve (north tip of watershed), the Rogue-Umpqua Wilderness (southwest corner), and administratively withdrawn for unroaded recreation. Late successional reserves are areas managed to protect and enhance conditions of late-successional and old-growth forest ecosystems. Matrix lands are those available for timber management at varying levels.

Anadromous fish have not had access to Fish Creek since the early 1950s, when Soda Springs Dam was constructed. Cutthroat trout are thought to have had access to Fish Creek prior to the construction of the dam. Presently, no cutthroat trout exist in Fish Creek. Their disappearance may have occurred through hybridization with the resident rainbow trout. Currently, the only fish species present in the Fish Creek system are resident rainbow trout, non-resident brook trout, and brown trout. Brook trout have established stream-dwelling populations in Fish Creek by emigrating from Mosquito and Wolf lakes located within the watershed.

Fish Creek, the major stream in the Fish Creek Watershed, is on the final 2002 ODEQ 303(d) list for stream temperature and dissolved oxygen.

Stream channel conditions in this watershed, as measured in 1997, are good overall. However, more than 25 percent of the watershed's riparian areas have been reduced by past road construction and timber harvest. At this level of disturbance, adverse impacts to stream channel stability and water quality are likely, due to a loss of recruitable large woody debris to the stream channel and reduction of streamside shading. Lower Fish Creek has the lowest level of large woody debris in the watershed.