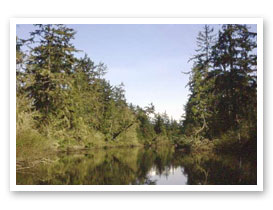 Freshwater tidal wetlands occur in the intertidal zone along coastal rivers, upstream from the Estuarine system where salinity ranges from 0.5 ppt to 0 ppt. They extend along the edges of rivers and their tributaries to the head of tidal influence, which can be up to 20 miles inland along the shorter coastal river to 143 miles inland along the Columbia River. The tidal cycle is similar to that on the coast, but timing is delayed and the amplitude of tidal surge attenuates further upstream to about 3 feet at Portland and 1 foot near Bonneville Dam. Freshwater tidal wetlands can be herbaceous, shrubby, or forested, and like salt marshes are hydrated by meandering tidal creeks. Plant species diversity in these wetlands is extremely rich, and many of thousands of acres have been diked, drained, and farmed. 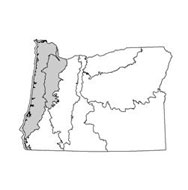