Getting to the Root of the Problem: Juniper Removal and Upland Restoration in Oregon

Knowing trees, I understand the meaning of patience. Knowing grass, I can appreciate persistence.      -- Hal Borland

Western juniper, an iconic evergreen in the arid West, was once largely confined to rocky ridges and isolated patches on shallow soil. In the last 130 years, however, there has been a tenfold increase in the acreage covered by juniper woodlands in Oregon. This increase has land managers worried -- juniper displaces native shrubs and grasses that provide forage for livestock and habitat for at-risk species like the sage grouse. Managers are also concerned about the trees' impact on an area's water cycle, as the trees absorb much more water than native grasses or shrubs.

In Central and Eastern Oregon, the issue of juniper encroachment has become a main cause of many ecological imbalances, and restoration efforts must often must address the spread of junipers even when the project focuses on streams or rangelands. Tim Deboodt, an Oregon State University extension agent in Crook County, describes this widespread problem: "If we want to restore streams and fish habitat...we need to have our backs to the creek and look at the problems upslope."

The Problem - Land Use and Juniper Encroachment

The vegetation community that dominates Eastern Oregon evolved to withstand periodic fire -- even water-loving aspen that thrive in riparian areas are adapted to fire disturbance. However, juniper is not fire tolerant. Before European settlement, the junipers range consisted of isolated pockets where fire was uncommon. Rick Miller, an Oregon State University rangeland ecologist, has spent his 33-year career studying juniper. He says about the junipers range: "If you are looking for old juniper trees, you go to sites that are on shallow soils that don't produce very much understory so there is not a lot of fuel to carry fire."

In the 1880s, the introduction of cattle and consequent heavy grazing led to a decrease in the number of wildfires annually. Cattle cropped most of the grasses that normally becomes fuel for wildfires. "The biggest thing that livestock grazing did was reduce the fine fuel component in more productive sites where fire would reoccur," says Miller. Without fire, juniper woodlands began expanding into areas once dominated by sagebrush and aspen. The fire suppression policies of the 20th century also allowed the spread of juniper to continue. Miller notes that other factors, such as climatic conditions and increasing levels of atmospheric carbon dioxide, have also aided the expansion of juniper woodlands.

Miller uses phases to describe the stages of juniper encroachment and their effects. In Phase I, shrub and grass species still dominate a site and wildlife diversity can remain high. In Phase II, junipers are mixed with woody and herbaceous vegetation, and wildlife diversity can remain high. However, there can be less forage for cattle and less cover and food for sagebrush-dependent wildlife. In Phase III, junipers dominate a site and form a dense stand with minimal understory plants. In many cases, the trees outcompete understory plants for nutrients, water, and sunlight forming areas of bare soil between trees and exacerbating soil erosion.

The Link to Streams

In a 2009 report for the Oregon Watershed Enhancement Board (OWEB), author Hugh Barrett describes a history of observations linking juniper encroachment to reduced spring and stream flow. Ranchers tell of springs drying up or year-round channels losing their summer flow as junipers became abundant in a watershed.

Barrett notes that enthusiasm for this theory gained momentum in the 1970's when studies by Miller showed that a mature juniper could draw 25-35 gallons of water a day. If the trees were taking up such a large amount of water, certainly there would be less available groundwater for springs and streams. However, in a 2005 review paper on juniper encroachment, Miller and his colleagues point out that this link hadnt been verified by scientific studies. "The whole streamflow question is still, in my mind, an open debate. We do not know what effect the trees are really having on streamflow. It is a very complicated problem to study," says Fred Pierson, a research hydrologist with the USDA Agricultural Research Service in Boise and a coauthor on on the 2005 paper.

The issue of juniper encroachment is complicated because plants are only one of the many interacting factors that influence how water moves underground. In addition to vegetation, soil type, bedrock composition, topography, and the timing and type of precipitation are also important. Pierson comments, "In this part of the world, we find that streamflow is driven by snowpack. Any time you change how snow is accumulated or melted on the landscape you are potentially going to affect streamflow. When you replace shrubs and grasses with trees that are much larger and taller you are going to trap and melt snow differently than on shrubs and grasses."

In an effort to evaluate the impact of junipers on the water cycle, organizations such as the Environmental Protection Agency, Bureau of Land Management Science Grant program, and OWEB have provided funding for the Camp Creek Paired Watershed Study in the Crooked River watershed southeast of Prineville. Established in 1993, the team monitored groundwater levels and stream flow in two neighboring watersheds with similar physical characteristics and vegetation. After collecting 12 years of pre-treatment data, in the fall of 2005 they cut the juniper within one basin. Currently, the team are monitoring the impacts of juniper removal, and according to Deboodt, the initial results are surprising. The scientists have measured an increase in deep soil moisture, an increase in groundwater in shallow wells, and an increase in spring flow. In addition, these increases have taken place during low water years when annual precipitation was just 70 percent of the long-term average, lending further support to the theory that junipers remove a substantial amount of water from the ground.

Many projects have focused on removing juniper in Oregon since the 19507acu s, but the rationale for removal and the removal methods have changed over the years. In his 2009 report to OWEB, Hugh Barrett describes how projects in the 1960s and 1970s focused to improving forage for deer and cattle. The removal efforts were not widespread, but often used harsh methods. Barrett describes "chaining", a practice involved uprooting trees by dragging heavy chains over the ground. This method resulted in significant soil disturbance, increasing the risk of soil erosion and weed invasion. 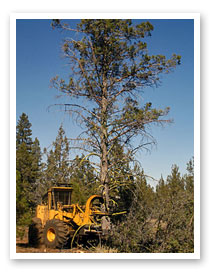 In recent years, the rationale for removal efforts has shifted to broader goals of improving rangeland function or improving watershed health. Todays removal methods most often involve chainsaws, prescribed burns, or a combination of the two. Barrett also notes that the number and size of removal efforts has grown and more groups have become involved. Funding for removal projects has diversified, coming from federal, state and private sources such as the Natural Resources Conservation Service, the Bureau of Land Management, the U.S. Forest Service, and the Oregon Watershed Enhancement Board. Barrett describes how there has also been a shift from small projects encompassing 20 to 60 acres to broad-scale land treatments involving multiple landowners. The South Prineville Reservoir Watershed project, for example, covers 20,000 acres in the Crooked River watershed and involves state, federal and private groups.

As the number of juniper removal projects has grown, so has the effort to develop better removal protocols. Increasingly, these plans emphasize the need to choose sites and treatment methods based on careful site assessments. Miller comments that the assessment is important because pre-treatment conditions often are the best predictor of project success. "A good site is one that is relatively wet, has good soils, and still has a decent understory. That is the kind of site where you are going to have a high probability of success." Initial site conditions also help determine the most appropriate removal method and follow-up management. Burning removes young juniper, and may therefore be appropriate for Phase I or II sites. However, burning will also remove the shrub layer, making this method a poor choice for areas where there are sensitive, shrub-dependent species like sage grouse.

Several tools are available to land managers seeking to assess a site before removing juniper. Ecological Site Descriptions are available through the U.S. Department of Agriculture's Natural Resources Conservation Service. Depicting both rangeland and forestland, the ESDs include site characteristics such as vegetation, soils, climate, and topographic position, all of which influence how the land will respond to management and disturbance. Miller is encouraged that three federal agencies have adopted the use of ESDs. Barrett has also developed a juniper removal guide for OWEB, which emphasizes the importance of site assessment in designing a project.

In addition, Miller has co-authored two management guides published by the U.S. Geological Survey. The guides focus around the idea of "asking the right questions" when it comes to project planning and site assessment. For example, the guides lead managers to consider questions concerning soil type, stage of succession and tree age stucture, and long-term goals for the site. As Miller notes, "We train students to give answers but what I want them to start thinking about is, what are the questions that we need to ask?"