Habitats in the Willamette Basin

Since European American settlement of the Willamette River Since European American settlement of the Willamette River Basin began over 150 years ago, we have generally used its natural resources in ways that do not maintain the basin's full natural heritage of native plants and animals. We often impose human enterprise on the landscape for short-term economic gains rather than long-term health and prosperity of both ecological and social systems. In recent years, an understanding of our impact on the landscape has prompted a new vision for the region -- one in which there is room for both nature and people.

In its historic, unfragmented state, the entire basin contained a mosaic of dry and wet habitats that worked like a sponge, gathering winter water and releasing it slowly over the summer. The past 150 years of settlement and development have drastically changed how the landscapes natural plumbing system works. Many of the natural sponges and reservoirs -- the wetlands, floodplain forests, and wet prairies -- are now gone. They have been drained, filled or isolated from the rivers that once replenished them. Much of the old-growth forest that protected upland soils and streams has been cut, replaced by younger forests with provisions to protect soils and streams but not to provide old forest ecological values. Nearly all of the savannas, upland prairies and oak woodlands which provided habitat for grassland species have now been converted to other uses, affecting the fate of the many species that depend on them. 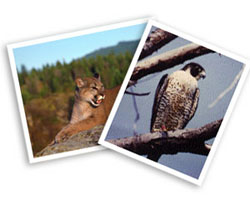 Because of these changes, a flourishing ecosystem will require not only dedicated natural areas and restoring individual species, but also restoration of the natural processes that nourish and sustain our ecosystems. With the current and future human population it is unlikely that every part of the basin will be restored to a "natural" condition. But, it can mean restoring a small urban wetland, an area of oak woodland on the outskirts of a suburban neighborhood or a stretch of riparian forest nestled between a river and farm fields. This restoration will also take place on a much smaller scale as we learn to select native landscaping plants, and ensure that our homes, workplaces and neighborhoods encourage and enhance the natural ecology of their location within the basin.

Although the past 150 years of development has radically altered, and practically eliminated, some of the Willamette Basin's native plant communities, examples of all habitat types remain. Many such areas are ripe for restoration, or are in the process of being restored. These places are scattered throughout the basin and, with committed effort over the long term, will create a network of conservation and restoration essential to the region's vitality.