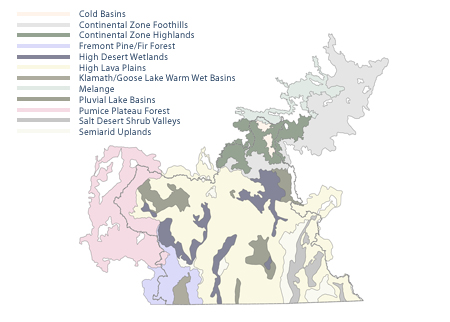 Ecoregions denote areas of general similarity in ecosystems and in the type, quality, and quantity of environmental resources, and are designed to serve as a spatial framework for the research, assessment, management, and monitoring of ecosystems. By recognizing the spatial differences in the capacities and potentials of ecosystems, ecoregions stratify the environment by its probable response to disturbance (Bryce et al., 1999). Ecoregions are directly applicable to the immediate needs of state agencies, including the development of biological criteria and water quality standards and the establishment of management goals for nonpoint-source pollution (Omernik and Griffith, 1991; Hughes et al., 1990; Whittier et al., 1988). Ecoregions are also relevant to integrated ecosystem management, an ultimate goal of many federal and state resource management agencies.

Oregon is ecologically diverse. The west side of the state has a marine-influenced climate and receives plentiful precipitation three seasons of the year. In contrast, eastern Oregon lies in the rain shadow of the Cascades and is much drier. The climatic gradient is evident in the state's landscapes: forested mountains, glaciated peaks, shrub- and grass-covered plains, agricultural valleys, beaches, desert playas, and wetlands. There are 65 level IV ecoregions in Oregon.

The Oregon ecoregion project is part of an interagency effort to develop a common framework of ecological regions for the United States. Reaching that objective requires recognition of the differences in the conceptual approaches and mapping methodologies applied to develop the most common ecoregion-type frameworks, including those developed by the USFS (Bailey et al., 1994), the USEPA (Omernik, 1987, 1995), and the NRCS (U.S. Department of Agriculture-Soil Conservation Service, 1981). As each of these frameworks is further refined, their differences are becoming less discernible. Regional collaborative projects, such as this one in Oregon, where agreement has been reached among multiple resource management agencies, are a step toward attaining consensus and consistency in ecoregion frameworks for the entire nation.

The Cold Basins ecoregion contains high, wet meadows. The high meadows are often alluvial and have a high water table and silt or clay soils. Streams, if not channelized, are meandering and have a dynamic interaction with their flood plains. These unconstrained streams provide pool habitats that are important to salmonids. The short growing season and saturated soil make these basins unsuitable for most crops, except hay, but they are heavily grazed by cattle and elk.

The Continental Zone Foothills lie in the rainshadow of the Cascade Range and Blue Mountains. Plants experience wide temperature variations, high evapotranspiration rates, and high early-season moisture stress in the continental climate of this ecoregion. The distribution of desert shrubs varies with soil depth, texture, and elevation. Mountain mahogany and bitterbrush provide winter cover and forage for mule deer. Rodents, songbirds, and upland game birds also use the fruits of bitterbrush.

The mountainous Continental Zone Highlands experience seasonal temperature extremes and low annual precipitation. The predominant forest cover is ponderosa pine with a shrub or bunchgrass understory. As in the John Day/Clarno Highlands, frequent fires once influenced the open character of the forest. This ecoregion lacks a zone of true firs found in other highland areas in the Blue Mountains. Many of its perennial streams flow south to end in the alkaline basins of the High Desert Wetlands.

The Fremont Pine/Fir Forest ecoregion contains mid-elevation mountains and high plateaus that rarely exceed timberline. Closed canopy forests contrast with the savanna of the Klamath Juniper Woodland. Ponderosa pine is widespread, but white fir, sugar pine, and incense cedar also grow above 6,500 feet and on north slopes. Residual soils are common in contrast to the Pumice Plateau, where residual soils have been deeply buried by pumice and ash. This ecoregion has a high density of lakes and reservoirs.

The vast, nearly level to undulating High Lava Plains ecoregion is shrub- and grass-covered and contains scattered volcanic cones and buttes. This ecoregion is internally-drained in contrast to the High Lava Plateau, and, as a result, it lacks anadromous fish runs. This ecoregion also differs from the Dissected High Lava Plateau in having numerous intermittent lakes like the Pluvial Lakes Basins and the High Desert Wetlands. The vegetation is sagebrush steppe; bunchgrasses, including bluebunch wheatgrass, are generally associated with Wyoming big sagebrush except in overgrazed areas where they have been depleted and replaced by cheatgrass.

The Klamath/Goose Lake Basins ecoregion covers river floodplains, terraces, and lake basins. A variety of wildrye, bluegrass, and wheatgrass species once covered the basins, but most of the wet meadows and wetlands have been drained for agriculture. Several marshland wildlife refuges are key to preserving regional biodiversity, particularly at-risk bird and fish species.

The Melange ecoregion has a complex geology, composed of ocean sediments, granitic intrusions, and metamorphic sediments formed through heat and pressure. Soils are droughty and high in magnesium, creating a poor medium for plant growth; reforestation problems limit logging. Placer mining, or the mining of streambed sediments, for gold altered the structure of many stream channels and left extensive tailings piles in riparian areas.

The Pluvial Lake Basin contained vast lakes during the Pleistocene epoch, but, today, do not seasonally collect water as extensively as the High Desert Wetlands. The dry lake beds near the Cascade Mountains have a significant ash layer present. Sagebrush dominates with associated grasses. The land is used for rangeland and sprinkler-irrigated alfalfa farming.

The Pumice Plateau ecoregion is a high volcanic plateau. This ecoregion is characteristically covered by thick deposits of pumice and volcanic ash. Soils are very deep, highly permeable, and droughty. Spring-fed creeks and marshes occur. Ponderosa pine forests are common on slopes; colder depressions and flats are dominated by lodgepole pine and higher elevations have white fir. Freezing temperatures are possible any time of year.

The Semiarid Uplands ecoregion includes scattered hills, low mountains, and buttes. Elevations vary from 4,800 to 7,500 feet. Moisture levels are high enough to support woodland. Ecoregion 80j is largely covered by juniper steppe woodland on rocky soils and sagebrush steppe or Idaho fescue on more finely textured soils. The density and extent of juniper varies over time and is dependent on climate, grazing pressure, and fire suppression.