The Lemolo Lake fifth-field watershed is the easternmost watershed in the Umpqua Basin. The watershed is 76,564 acres and includes the final 14 miles of the North Umpqua River. Lemolo Lake watershed stretches a maximum of 17 miles north to south and 13 miles east to west. 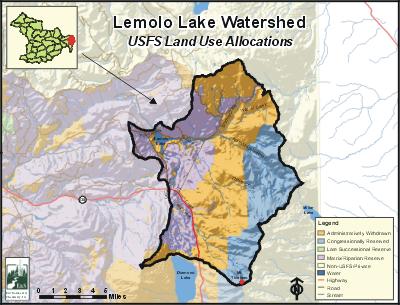 The Lemolo Lake Watershed is characterized by gentle to moderate slopes and low relief topography. The exceptions are the jagged Mount Thielsen and other peaks along the eastern edge of the watershed at the crest of the Cascade Mountains. Elevations range from 9,182 feet at Mount Thielsen on the southern tip of the watershed to 4,120 feet at the dam forming Lemolo Lake on the North Umpqua River. Other high-elevation areas include Howlock Mountain (8,324'), Tipsoo Peak (8,034'), and Miller Mountain (7,513'), all of which are on the watershed's eastern flank.

The North Umpqua River flows from its headwaters at Maidu Lake, through Kelsay Valley, and into Lemolo Lake. With the exception of some headwater streams, most streams within the watershed are of fairly low gradient.

This watershed boasts many interesting geological features. Most prominent among these features are Mount Thielsen, "the Lightning Rod of the Cascades," and several other relatively young volcanoes. Glacial activity has shaped the watershed, primarily in the form of glacial deposits, but also from glacial erosion. Tiny Lathrop Glacier, located beneath the craggy cliffs of the north face of Mount Thielsen, is Oregon's most southerly glacier. The eruption of Mount Mazama, with the subsequent formation of Crater Lake, spewed pumice and ash over a widespread area of the watershed about 7,000 years ago.

The vast majority of the land base in the Lemolo Lake Watershed is used for public forestry purposes. A small percentage of the land is comprised of Lemolo Lake, created in 1954 as part of PacifiCorp's North Umpqua Hydroelectric project, and the resort and recreational facilities surrounding it. Land ownership is solely federal, with administration by the U.S. Forest Service's Umpqua National Forest. The watershed is split into three roughly-equal areas for land management purposes: the Mount Thielsen Wilderness on the eastern flank, the Oregon Cascades Recreation Area in the middle, and matrix areas on the western flank of the watershed. Matrix lands are those available for timber management at varying levels.

The Lemolo Lake Watershed provides habitat for rainbow trout, brook trout, brown trout, and kokanee. The non-native tui chub are numerous in Lemolo Lake. These fish communities are simple, primarily because of the lack of connectivity to the lower North Umpqua River caused by natural and man-made migration barriers.

Lake Creek, the major stream in the Lemolo Lake Watershed, is on the final 2002 ODEQ 303(d) list for year-round stream temperature.

Stream surveys taken in 1996 and 1997 show stream channel stability as moderate to high, with little evidence of significant slope failure or mass movement and minimal amounts of streambank erosion. In-stream large woody debris is of moderate frequency in all steam types. Riparian areas remain intact, with some exceptions in Lake and Poole creeks.

Diamond Lake, located outside the watershed, is being drawn down to allow rotenone treatment of the undesirable tui chub fish. The drawdown will have short-term, indirect impact upon Lake Creek and Lemolo Lake within the watershed.