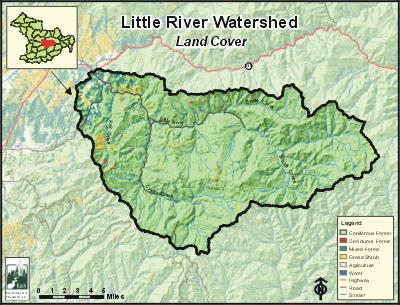 The Little River watershed ranges in elevation from 730 to 5,275 feet, and is in the transitional zone where the coniferous forest of the western Cascade Mountains meets the eastern edge of the mixed hardwoods, prairies, and conifers of the Umpqua Valley hills.

The most common land use in the Little River watershed is forestry, (97%) while agriculture constitutes less than 1% of the land use. Sixty-three percent of the watershed is public land administered by the US Forest Service (63,575 acres) and the Bureau of Land Management (19,802 acres). The remaining 37% (44,772 acres) is private land. Most of the private land (73%) are in blocks greater than 40 acres and are managed as industrial forest. Most of the homes are in the lower portions of Little River and Cavitt Creek where people operate small ranches or otherwise live in a rural setting. 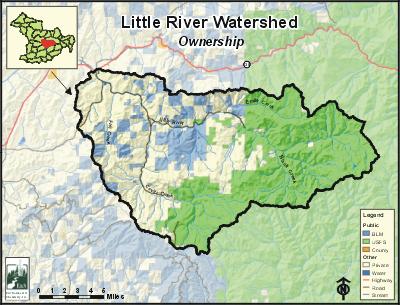 According to the Little River Watershed Analysis conducted by the US Forest Service and Bureau of Land Management in 1995, the majority of the riparian zones are characterized by narrow bands of small trees. In general, large trees have been selectively removed. However, between Negro Creek and Clover there is a relatively contiguous stand of old growth conifer, providing a significant potential source of large wood, as well as providing shade to the stream. There is also a lack of large wood in stream channels, and annual wood deposits in the lower river areas were being removed by private landowners. Highly degraded habitat conditions were apparent in Black, White, Jim, Fall, Copperhead, and Boulder Creeks, while relatively pristine conditions were found on Flat Rock Branch, Middle Emile Creek, Cultus creeks. Overall, the majority of the streams were considered to be in a degraded condition. According to the Oregon Department of Fish and Wildlife (ODFW) surveys, there are 22 falls, 13 culverts, three dams, and one boulder chute within the Little River Watershed.

A TMDL (Total Maximum Daily Load) analysis was conducted for the Little River Watershed in 2002. Once a TMDL has been completed, streams are removed from the ODEQ 303(d) list of water quality impaired streams, and guidance is provided to improve water quality conditions. The most important water quality concerns in the watershed are water temperature (in the summer), pH, and flow modification. A total of 66 stream miles, including most of the major tributary streams in addition to the mainstem of Little River, were considered to be water quality limited due to high water temperatures in the summer months. Forty-one miles of streams were water quality limited for sediment and flow modifications. A Water Quality Management Plan (WQMP) was developed by ODEQ to address these concerns.