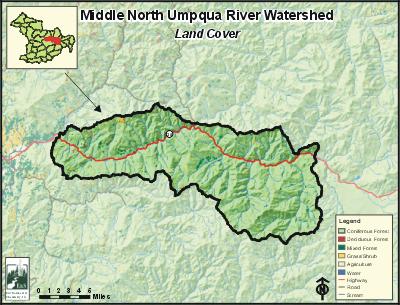 The most common land use in the watershed is forestry, with nearly all the land base used for public or private forestry. A small portion of the watershed along the North Umpqua River is used for residential or commercial (motels and other recreational facilities) purposes. Another small portion is used for agriculture. Land ownership is 88% federal (lands are administered by the U.S. Forest Service and the Bureau of Land Management), 12% private, and less than 1% county.

On federally-administered lands in the watershed, management allocations are split roughly equally between matrix and late successional reserves. Late successional reserves are areas managed to protect and enhance conditions of late-successional and old-growth forest ecosystems. Matrix lands are those available for timber management at varying levels. A small area on the far eastern edge of the watershed is included in the Boulder Creek Wilderness. This part of the wilderness includes the 1,420-acre Umpqua Rocks Special Interest Geologic Area. The prominent Eagle Rock, Rattlesnake Rock, and Old Man Rock are excellent examples of the large volcanic monolithic spires in this geologic area. The entire length of the North Umpqua River in the watershed is designated as a Wild and Scenic River. 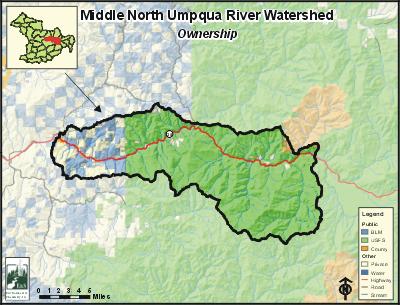 As with many watersheds in southwestern Oregon, stream temperature limits water quality in much of the watershed. The North Umpqua River and five of its tributaries are on the final 2002 ODEQ 303(d) list for summer stream temperature. The North Umpqua River is also 303(d) listed for year-round arsenic levels. The high levels of arsenic are most likely a result of the volcanic geology of the area.

Timber harvest, salvage logging, road construction, and stream clean out have modified approximately 32 percent of the riparian areas within the watershed. Large fires in 1987 and 2002 have had additional impact upon riparian areas.

Aquatic habitat conditions within the watershed vary from good to poor. Streams with road access into riparian areas have been most impacted by timber harvesting and stream cleanout. These streams have relatively high temperatures, low densities of large wood, and limited gravel retention capability. Good habitat exists where management access to the riparian areas is limited.