Restoration, Enhancement and Creation of Wetlands

Beyond the obvious clue in its name, what constitutes a wetland? Each wetland has three key elements: hydric (water-retentive) soils; hydrology (its pattern of catching, holding and releasing water); and specialized vegetation. Ecologically sound and cost efficient rehabilitation of drained and degraded wetlands systematically reverse the effects of human activities on these essential aspects of wetlands. Lets distinguish among several terms commonly used in reference to wetlands:

Wetland restoration. establishes conditions similar to the original condition of an area where wetlands have been changed by human activities. Many of Oregon's former wetlands are significantly disturbed; having been altered through ditching, drain tile installation, stream channelization and sedimentation. These areas generally have hydric soils and may have some wetland plants growing among weeds or crops. Because hydric soils form very slowly and their characteristics are difficult to create, restorations generally take place where hydric soils have historically existed, but where the hydrology or vegetation has been altered. Wetland restoration often restores the natural hydrology and topography of a site. Wetland restoration at these sites seeks to reestablish as much as possible the areas original hydrology and topography, and to restore natural processes including the original native plant cover. 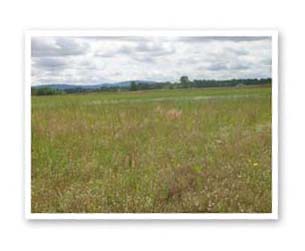 Wetland enhancement. maintains and manages existing wetlands for a particular function or value. Enhancement compensates for natural processes that no longer exist, helping to restore severely degraded wetlands to a higher quality. Generally, its targets are improved wildlife habitat and native vegetation diversity. Enhancements might include prescribed burns, invasive species control, plantings in upland buffer zones, or nest boxes for wildlife. Wetland enhancement can also change the physical characteristics of a functioning wetland, for example by impounding water behind a dike or dam, or by dredging a pond in a relatively undisturbed wetland. Such activities usually require permits, and may enhance one wetland function at the expense of others. Enhancement techniques should be evaluated carefully, because one generations enhancement could cause unintended problems for the next. 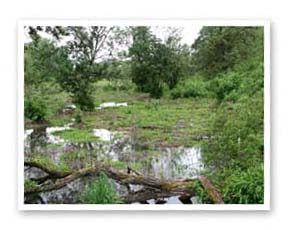 Wetland creation. establishes a wetland in an area where a wetland never historically existed. The first problem encountered in creating wetlands "from scratch" lies in establishing a balanced wetland hydrology. Even if that is accomplished, hydric soils are also critical to establishing a healthy wetland plant community. It is difficult to create the soil conditions that were formed by natural processes over thousands of years! Today's artificial wetlands are formed by impounding water behind a dike or dam, or by excavating surface soils in an upland area to create a depression. These efforts can be costly and labor-intensive. The resulting "wetland" may not fit into the landscape, and may never function as a natural wetland.

Thanks to careful monitoring of numerous Oregon wetland restoration, enhancement and alteration sites over the last three decades, we are coming to understand what works and what doesnt. We have found that, indeed, by systematically undoing the changes of the past, an ecologically sound and cost-efficient wetland recovery project can bring a drained and degraded wetland back to life.