Restoring and Maintaining Healthy Watersheds in the Deschutes Basin 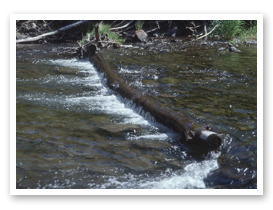 In Central Oregon's high desert environment, more than 75% of all birds and mammals rely on stream corridors and the associated riparian vegetation for nesting and foraging. Healthy riparian vegetation also supports healthy fisheries because streamside vegetation keeps the water cool, reduces erosion, and filters runoff from nearby farms and cities. Given the importance of riparian areas, restoration efforts throughout the Deschutes Basin often focus on protecting and restoring riparian areas. Projects may include fencing to exclude livestock from sensitive areas, replanting of degraded riparian areas, and stream channel restoration. 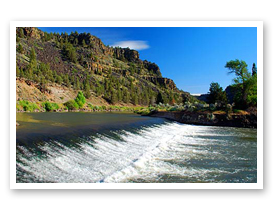 Most of the crops grown in Central Oregon rely on irrigation water diverted from local rivers and streams. When many of these diversions were developed, in as early as the 1950s, there was little knowledge of how dams and diversion could affect fish populations. Today, local, state, and federal partners are working together to ensure that irrigation dams are retrofitted to allow up- and down-stream migration for native fish. At the same time, fish screens are being installed on many of these diversions to prevent fish from being trapped in irrigation canals.

There are hundreds of diversions in Central Oregon that will ultimately need to be reconstructed, but, over time, these improvements will help protect native fish populations while still allowing farmers to access water for irrigation.

Nearly 90% of the streamflow from the Deschutes River is diverted through irrigation canals during the irrigation season, which typically runs from April through October. During the summer months, the diversions cause a dramatic reduction of streamflow. The porous, volcanic soil in central Oregon causes as much as half of the water that is diverted from the river to seep into the ground before it reaches the crops. As a result, irrigation districts need to divert twice the amount of water they need in order to to serve their customers. These seasonal flow disruptions have contributed to degraded fish habitat, poor water quality, and a decline in the overall health of the Deschutes.

However, steps are being taken to reduce the amount of irrigation water lost to the ground. A $2.1 million project has been undertaken by the Three Sister Irrigation District (TSID), the Upper Deschutes Watershed Council, the U.S. Forest Service, the Deschutes River Conservancy (DRC) and the Deschutes Basin Land Trust. The project involves modifying the intake structure for the irrigation districts canal, and enclosing the canal itself. By replacing the canal with a series of pipes, water will no longer be lost to the ground. The project will eliminate water loss, reduce the districts maintenance and operating costs, and allow the district to transfer some of its long-held water rights. Some of these rights are to be transferred to the DRC to supplement instream flow. The project is slated for completion in spring 2011.

Restoration projects are the focus of many land management agencies and non-profit organizations in the state of Oregon. But how are these projects monitored? Long-term restoration monitoring is an important tool used to track the success of collaborative restoration efforts By tracking key indicators, such as water temperature, fish spawning success, or streamflow, managers can answer important questions about restoration progress. Monitoring also helps local watershed managers fine-tune their restoration strategies based on what techniques prove to be effective. In the Whychus Creek watershed, the Upper Deschutes Watershed Council and Deschutes River Conservancy are engaged in a long-term monitoring program to examine trends in watershed health.