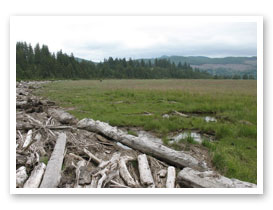 Salt marshes and brackish marshes occur in the intertidal zone of coastal estuaries. They are dominated by salt-tolerant herbaceous plants and are usually intermixed with intertidal mudflats that are rich with invertebrates and seaweeds. Farther inland in an estuary, salinity becomes diluted by fresh water from rivers and streams, and a gradual transition to freshwater plants and animals occurs, and woody vegetation becomes more evident. The Cowardin Classification identifies the transition from Estuarine to Riverine and Palustrine systems at points where salinity drops to less than 0.5 parts per thousand (ppt). This transition zone is a moving target in upper estuaries, and is influenced by seasonal or episodic river flows and fluctuations in daily tidal cycles. With the anticipated rise in sea level associated with global climate change, many salt and brackish marshes may become permanently inundated, and their landward edges will advance into what are currently freshwater marshes, shrub swamps, and uplands. The estuarine-freshwater transition zone will also migrate upriver with rising sea level. 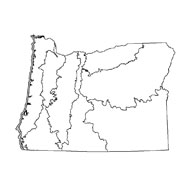