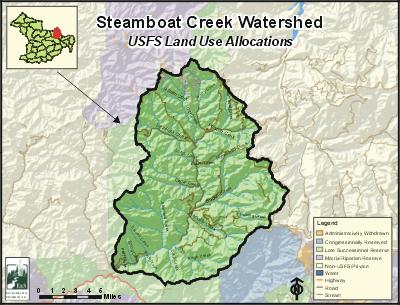 The Steamboat Creek Watershed is located on the south-facing slopes of the Calapooya Divide between the Willamette and Umpqua basins. Elevations range from 1,200 feet at Steamboat Creek's confluence with Canton Creek to 5,990 feet at Bohemia Mountain on the north end of the watershed. Watershed topography is highly variable, with landforms characterized as a sea of rolling hills and mountains in a moderate erosional state. Streams in this area have relatively gentle gradients and appear to be well incised into their respective gorges.

The Steamboat Creek Watershed provides habitat for summer and winter steelhead, migratory and resident cutthroat trout, spring chinook salmon, and coho salmon, though chinook and coho salmon are present in very low numbers. Other native fish in the watershed include rainbow trout, redside shiner, and sculpin and dace species. Non-native brook trout have been stocked in several impoundments within the watershed. However, snorkel surveys in 1997 did not find them in Steamboat Creek. Pacific lamprey are present within the watershed. Brook lamprey are thought to inhabit the watershed, too, but their presence has not been documented. Steamboat Creek and its tributaries have been closed to fishing since 1932.

Harvest within riparian areas, large woody debris removal, and removal of wood from streams during the 1960s, 1970s, and 1980s have left the watershed in short supply of large woody debris. The resulting increased water velocities have washed sediment and gravel from Steamboat Creek and the lower reaches of some of the tributaries. High quality over-wintering habitat in these areas is in short supply.

Mining in the watershed dates back to the late 1850s when gold was first discovered. The Bohemia Mining District was formed in 1867. Access trails were established between the Upper Steamboat watershed and the communities of Oakland and Drain during these early years. The majority of this early mining activity consisted of hard-rock mining in the vicinity of Fairview Peak and Bearbones Mountain. In addition to the hard-rock mining, there were numerous placer mines along the main stem of Steamboat Creek in the early 1900s. In 1959, the Forest Service and the Oregon Department of Fish and Wildlife recognized the importance of the Steamboat Creek watershed to anadromous fish. This recognition led to mining and fishing restrictions along Steamboat Creek proper. In 1976, this mineral withdrawal was extended to include portions of fifteen tributaries to Steamboat Creek.