A Steppe Ahead: Restoring the Sagebrush Community in Eastern Oregon

Things alter for the worse spontaneously, if they be not altered for the better designedly.  -- Francis Bacon 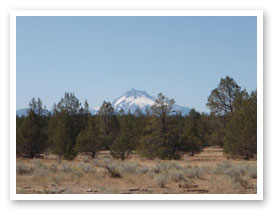 On the north side of Steens Mountain an ambitious ecosystem restoration effort is underway. Called the Five Creeks Rangeland Restoration Project; it covers almost 75,000 acres of public and private land. The goal of the project is to restore sagebrush steppe and riparian plant communities, improving ecological conditions for wildlife, fish and livestock. Treatment focuses on removing western juniper, a desert conifer species that is spreading across the landscape and outcompeting other desert plants. The project is remarkable because of its geographic scale and numerous partnerships few other restoration efforts have treated such a large area with one coordinated effort.

Like in much of Eastern Oregon, the spread of juniper in the Five Creeks area originates with the region's settlement. In the 1880's, Europeans introduced livestock, which grazed the area heavily. Livestock reduced so-called "fine fuels", grasses and other plants that catch fire easily and help wildfire spread. Sagebrush communities such as these are adapted to fire, but juniper is not.

Over time, as junipers outcompeted grasses cropped by livestock, fewer wildfires occurred. This interruption in the fire regime gave the juniper a competitive edge, and it began expanding outward from isolated, fire-protected stands of old growth trees (for more information, read about junipers and fire). Even with a decline in grazing pressure in the 20th century, the expansion of juniper has continued at a surprising rate. Scientists estimate that juniper woodlands now cover ten times the area in Oregon that they did before European settlement.

Both ranchers and environmentalists view juniper encroachment as a threat. Thick juniper stands can shade out understory grasses that provide forage, increase soil erosion, block animal movement, and even alter groundwater levels and stream flows (for more information, read about juniper removal). Juniper also threatens the greater sage grouse is a chicken-like bird known for its showy, strutting mating dance. These birds depend on sagebrush for food, shelter, and protection from predators and their mating ritual requires large expanses of sagebrush habitat. The numbers of sage grouse have declined so precipitously in recent years that the U.S. Fish and Wildlife Service is considering protecting them under the Endangered Species Act.

Lisa Grant, a rangeland management specialist with the Bureau of Land Management, says that the Five Creeks Project gained momentum because of its location, and because of community support. Located on the north slope of Steens Mountain at an elevation between 4500 and 6500 feet, the area receives more rainfall than drier, lower elevation sites. Restoration efforts have been more successful at wetter sites. Land managers were also encouraged by the success of several small juniper removal projects in the area, and felt that a larger-scale project could also be successful.

The BLM manages about two-thirds of the land within the project boundary, and private in-holdings account for the other third. Private landowners have shown support for the project. The Harney County Soil and Water Conservation District has aided individuals in obtaining funds, from sources such as the Oregon Watershed Enhancement Board, to carry out sagebrush restoration efforts on their own lands. Ranchers showed commitment to the project with their willingness to keep cattle out of restoration sites one year prior to treatment and two years after treatment to restore fine fuels and establish new plants.

Restoration efforts usually use a sequential, three-step approach: juniper cutting, controlled burns, and in some cases, aerial reseeding. These steps are applied in different ways depending on local habitat conditions. For example, in dense juniper stands, crews may cut every other juniper so that downed trees will act as a bridge to bring fire into the canopy of live trees. If a juniper stand is so dense that minimal understory vegetation was present, it may be reseeded with native grass and shrub species. Areas without mature juniper may be broadcast burned without any cutting or reseeding. Crews from the Burns Interagency Fire Zone coordinate the controlled burns. Grant credits their knowledge of the landscape as key to the success and safety of the planned fires.

In sensitive areas such as riparian zones, the restoration team uses different techniques. For example, they may fell and hand-pile juniper in stands of willow and alder, returning later to "jackpot" burn the juniper piles when the ground is frozen or saturated. This technique prevents the burning of desirable species and groundcover in sensitive riparian areas. Near sage grouse leks (mating grounds), juniper may be cut and left where it falls, so that little sagebrush habitat is disturbed.

In the past three years, more than $2 million dollars has been spent on the Five Creeks Project. Money has come from a variety of sources, including the BLM, the Oregon Watershed Enhancement Board, the Burns Interagency Fire Zone, the America Recovery and Reinvestment Act, and private funds. In 2008 and 2009 workers felled juniper on over 10,000 acres and treated over 21,000 acres with prescribed fire. The project may continue for another seven to ten years.

The timeframe to determine whether the project is a success may be that long or longer. Grant says that shrubs have returned within five or ten years to the small restoration sites that inspired the team at the project's outset. Several groups have monitoring efforts underway at these sites, including the BLM, the Soil and Water Conservation District, the USDA Agricultural Research Service, and the inter-agency Joint Fire Science Program. Everyone's hope is that the landscape-scale approach used at Five Creeks will become a model that can be used at other sites.

BLM Environmental Assessment for the Five Creeks Rangeland Restoration Project - Description and maps of the project and comments received during the environmental review process.

Sagebrush Cooperative - Collaboration between public agencies, nonprofits and landowners. Works to identify strategies and priorities for successful conservation of sagebrush steppe ecosystems in the high desert of Oregon, Idaho and Nevada.

SAGEMAP. A GIS Database for Sage-grouse and Shrubsteppe Management in the Intermountain West maintained by the U.S. Geological Survey.