The Confederated Tribes of the Warm Springs Reservation

Before Europeans explored the Pacific Northwest, the Native American tribes of Oregon had developed long-lasting, complex societies. Three tribes -- the Wasco, the Walla Walla (later called the Warm Springs) and the Paiute -- lived in central Oregon. These three different tribes, speaking three different languages, would one day come together to create the Confederated Tribes of Warm Springs. 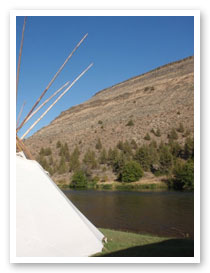 The Wasco tribe that lived on the Columbia River spoke a language called Chinook and relied heavily on salmon for food. The band traded with other Chinookan-speaking groups such as the Clackamas, and with Sahaptin-speaking bands such as the nearby Warm Springs and the more distant Nez Perce.

The Warm Springs bands lived along the tributaries of the Columbia. Unlike the Wascoes, the Warm Springs bands moved between summer and winter villages, and depended more on hunting game and gathering roots and berries than fishing. However, salmon was an important source of food for both tribes, and elaborate scaffolds were often built over rapids to facilitate fishing with long-handled dip nets.

The Paiutes lived in southeastern Oregon and spoke Shoshone. These high-plains bands lived a lifestyle that was considerably different from the Wascoes and Warm Springs bands. The Paiutes had to migrate further and more frequently to find game to hunt, and fish was not an important part of their diet. The differences in lifestyle, language, and geographic location between the Paiutes and the other two tribes often led to conflicts when tribes met.

Arrival of Settlers and Life on the Reservation

In the 1800s, European settlers began making their way into central Oregon. By 1850, 12,000 immigrants passed through Wasco and Warm Springs territories each year. In 1855, Joel Palmer, the superintendent for the Oregon Territory, received orders to remove the tribes from their lands. He did so by establishing a series of treaties with the tribes, including the one that established the Warm Springs Reservation. Under this treaty, the Wasco and Warm Springs tribes lost approximately ten million acres of land, but reserved the Warm Springs Reservation for their exclusive use. The tribes also retained rights to hunt, fish, and gather off the reservation.

Life on the Reservation

In the early years on the reservation, traditional life for the tribes changed dramatically. Food was not as plentiful on the reservation as it had been on their traditional lands, and the harsher climate made farming more dififcult. Federal assimilation policies also forced the tribes to abandon many of their cultural traditions in favor of European languages, religion, schools, and careers. In 1879, members of the Paiute tribe moves to Warm Springs from the Yakama Reservation in northern Washington. They eventually settled and became a permanent part of the reservation.

The Journey to Self-Sufficiency

In 1934, Congress passed the Indian Reorganization Act in an effort to revitalize Indian communities and help organize tribal governments. In 1937, the Wascoes, Paiutes, and Warm Springs tribes organized into the Confederated Yribes of the Warm Springs Reservation by adopting a constitution. The next year the tribes formally acepted a charter from the U.S. government to organize their buisness endeavors. Over the next sixty years, the tribes have become increasingly independent and have established themselves as a self-governing entity. The more notable accomplishments include the construction and partial ownership of the Pelton-Rounde Butte Dam, the establishment of wood products, hydropower, and timber enterprises, the construction of the Indian Head Casino, and the establishment of the Warm Springs Credit Enterprise.

Today, challenges are still faced by members of the Warm Springs tribes. The land off-reservation that was originally accessible for fishing and gathering has been developed into private homes and businesses, cutting the tribes off from their traditional food sources. Historically, as well as currently, Native American youth have experienced identity crises as they strive to balance traditional customs with modern culture and amenities. The tribes themselves struggle with another balancing act - how best to manage their natural resources in cooperation with the U.S. government. Differences in management strategy between the Bureau of Indian Affairs and the Warm Springs tribes has led to frustrations on both sides. However, tribal members and non-members continue to work together to advance the business, environmental, traditional, and community interests of the tribes and their neighbors. Louie Pitt, a Warm Springs tribal member and government affairs liaison, sums up this effort: "There have been people like us throughout history who have survived, and that's what we've done, we've survived."