The State of Oregon's Environmental Health

The environment is as simple - and as complicated - as our surroundings. It's simply the land, water, air, and all the flora and fauna that live here; it's also the complex interactions between all these components and us. Environmental health is just as complicated. It encompasses direct risks to human health, like toxic wastes, as well as more difficult to measure changes in the overall environment, such as decreases in biodiversity.

Why do we care? In many cases the direct result of environmental ill health is direct human ill health or suffering. In other cases, the direct result is not immediately clear or is more difficult to quantify. But our traditional reliance on natural resources requires us to pay attention to overall environmental health, in order that we can sustain our farming, forestry, and fishing heritage into the future. There are also federal laws and mandates that require particular levels of environmental health (the clean air and clean water acts, for example).

Rural Oregon, by virtue of being so closely tied with natural resource use, is particularly affected by changes in environmental health and policy.

In preparing the Oregon State of the Environment Report 2000 (excerpted below), the SOER Science Panel noted:

1. maintenance of natural ecosystem processes...;
2. sustainable production of goods and services for human use...;
3. compliance with environmental laws.

The State of Oregon's Environment 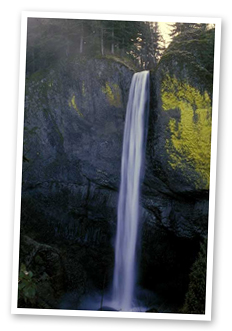 The people of Oregon care deeply about the environmental quality of their state. They treasure its natural beauty and they depend upon its natural resources for the basics of life as well as a vital part of the state's economy. To continue to enjoy and use natural resources, Oregon citizens want to know that their environmental wealth will last into the future. They understand that the future of Oregon will be shaped by the health of its environment...

In response to environmental problems during the 1960s and '70s, Oregon became a leader in the nation in land-use planning, reduction of waste, and land protection. The quality of life made possible by a healthy environment continues to attract new people and industry to Oregon...

Overall, the Science Panel found that Oregon has succeeded in resolving some of the critical problems of the past. Oregon's land use laws have limited the loss of forest and farm land. Coastal zone management has helped to reverse the loss of estuarine habitats. Forest practices rules have contributed to protection of forest streams. Recent changes in federal land management emphasize protection of biodiversity on federal forests and range lands. Yet, the panel also found that Oregonians now face a new set of environmental challenges that existing policies and programs may not be sufficient to address.

Many of Oregon's key environmental problems are concentrated in the lowlands where most Oregonians live and work. Aquatic ecosystems, which integrate many diverse activities, are most impacted and most at risk. Water quality in many lowland areas is poor throughout much of the year, and the structure and function of many riparian areas have been significantly altered from historical conditions. Further, many of these problems may not improve under existing policies and programs. Much of what potentially can be achieved on public lands is already reflected in new federal and state policies. Developing programs to address the cumulative effects on private lands is one of the greatest challenges Oregonians face.

Are Oregon's problems concentrated in the 'lowlands'? How is the stream and water health in your area?

You can use the Oregon Communities Reporter to explore the environmental health of an area by looking at the following variables: