Wetlands are threatened by both direct and indirect impacts related to land use. Direct impacts include conversion of wetlands to other uses, primarily urban and agricultural. Indirect impacts originate from surrounding land uses, based on the fact that what occurs on surrounding uplands usually ends up in wetlands. Sediments, nutrients, deicer salts, petroleum products, and agricultural chemicals from uplands all move downslope and downstream, and some even move into groundwater. 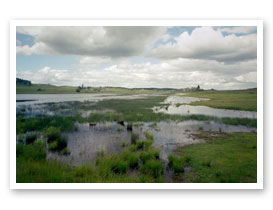 The most common and pervasive direct threats to wetlands are channelization, sedimentation, filling, drainage, mining, logging, overgrazing or trampling by livestock, and conversion to agricultural and urban uses. Indirect threats include groundwater pumping, diversion of water for domestic or agricultural use, plant succession occurring in the absence of periodic fire or other natural disturbance, invasion of exotic species, changes in water regimes caused by upstream dams or other development, and pollution caused by direct discharge into wetlands or runoff from uplands. Changing climate poses many potential problems for wetlands, but specific effects remain unknown.