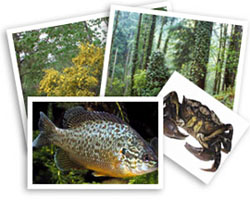 Invasive species are any species or other viable biological material that enters an ecosystem beyond its historic range, including any such organism transferred from one country into another. Invasive non-native species (also known as introduced, foreign, alien, and immigrant species) include both exotics and transplants.

Top 100 Most Invasive Species in Oregon

One invasive plant, purple loosestrife, can produce up to 2.7 million seeds per plant yearly and spreads across approximately 1 million additional acres of wetlands each year.

The glassy-winged sharpshooter, an invasive insect detected in California, carries with it the plant bacterium Xylella fastidiosa, a disease that has caused nearly $40 million in losses of California grapes. The disease poses a major threat to grape, raisin, and wine industries, as well as the tourism associated with them. Collectively these are valued at nearly $35 billion annually.