Over the last two centuries, millions of culverts, dikes, water diversions, dams, and other artificial barriers were constructed across the country to impound and redirect water for irrigation, flood control, electricity, drinking water, and transportation.  These structures have changed natural features of rivers and streams and, in some cases, impacted fish and other aquatic species.

This impact is especially concerning for salmonids, which migrate from freshwater rivers and streams to the ocean, then back again during their life cycle.  The ability of adult and juvenile salmonids and other species to reach spawning and rearing habitat is termed fish passage.  Obstacles to fish passage include dams, culverts, and tide gates, and can limit the long-term persistence of fish populations.

A major effort is underway to inventory all of the fish-passage structures in the Umpqua Basin.  The program, titled the Umpqua Basin Fish Access Team (UBFAT), is a coalition of nonprofit organizations, agencies, and landowners working to identify and rank the severity of barriers to fish passage.  Information from these inventories of fish passage is then used by landowners and managers to identify the barriers that are the highest priority for replacement.  Most of the inventory work is led by the Douglas Soil and Watershed Conservation District (DSWCD) and the Bureau of Land Management (BLM).

To date, UBFAT has collected fish-passage data on the majority of public lands in Douglas County.  Inventories have been completed on 25-30% of the land in the Umpqua Basin.  Over the last 6 years, UBFAT partners and landowners have used this information to identify barriers and replace them with modern structures that allows the stream to flow naturally and the fish to freely pass. 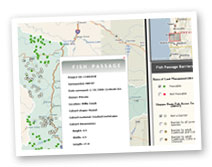 The Watershed Restoration Tool was created to show the locations of and some preliminary information from inventories of fish passage that have been completed in the Umpqua Basin. After you have launched the tool, a map of the Umpqua Basin will appear. On the left, you will see a legend explaining what the various features shown on the map are. On the map, green dots denote the locations of completed inventories. By clicking on a green dot, you will be presented with some preliminary findings, or attributes, from the inventories.