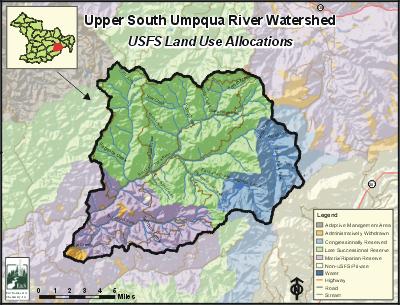 The most common land use in the Upper South Umpqua River Watershed is forestry, with nearly all the land base used for public forestry. Well over 99% of the land base is in public ownership and is administered by the Umpqua National Forest. The balance of the watershed - approximately 150 acres - is in private ownership.

The public lands are managed primarily as late successional reserves, with smaller amounts managed as matrix (lower watershed) and the Rogue-Umpqua Divide Wilderness (southeastern portion of watershed). Late successional reserves are areas managed to protect and enhance conditions of late-successional and old-growth forest ecosystems. Matrix lands are those available for timber management at varying levels. A small portion in the western tip of the watershed is managed as the South Umpqua Experimental Forest, including the Coyote Creek Experimental Watersheds. 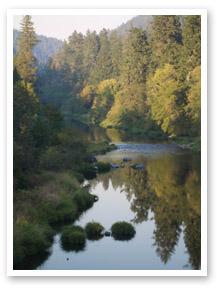 Approximately 35 percent of the watershed's riparian areas have been modified by timber harvest, salvage logging, road construction, and stream clean out. Recent forest fires have had additional impact upon riparian areas.