What makes an area rural or urban? Many definitions of rural and urban have been developed over the years. Definitions use such criteria as overall population, population density, commuting patterns, and/or distance from other settlements in determining rural and urban areas. Though other definitions for urban and rural exist, the following three are the most commonly used.

The US Census Bureau uses a formula involving population size (2,500 or more) and population density (500 persons per square mile or more) to classify a place as either rural or urban.

The Census Bureau divides the nation into census blocks, the smallest geographic entity for which the census reports population data. These are aggregated into block groups (which generally have between 300 and 3,000 people).

Applying this classification to the state of Oregon produces the rural and urban areas seen in Figure1 1. Urban areas are blue and rural areas are yellow.

US Office of Management and Budget Definition

The classification most commonly used by government agencies and researchers to identify rural areas is a county-based classification system developed in the late 1940s by the federal agency that became the Office of Management and Budget (OMB).

Counties are classified as Metropolitan if they contain an urbanized area of at least 50,000 people, or are adjacent to such a county and linked to it through significant commuting flows.

The OMB cautions that "Metropolitan and Micropolitan Statistical Area Standards do not equate to an urban-rural classification; all counties included in Metropolitan and Micropolitan Statistical Areas... contain both urban and rural territory and populations" (Federal Register Vol. 65, No. 249, p. 82228, December 27, 2000).In spite of this caution, the OMB classification system is the most frequently used system of identifying urban and rural areas for statistical purposes because it is a county-based classification system and most data are collected at the county level. Although it is most common to include both micropolitan and noncore counties in the rural category, some consider only the noncore counties to be "rural." 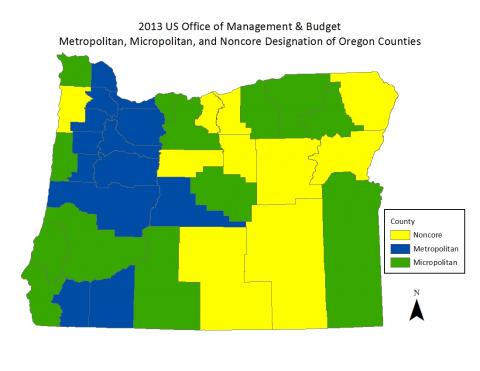 Figure 3: 2013 US US Office of Management & Budget - Metropolitan, Micropolitan and Noncore Oregon

The Rural-Urban Commuting Area (RUCA) Codes were developed following the 1990 census by researchers at the USDA Economic Research Service in conjunction with demographers at the University of Washington. The geographic basis for the RUCA Codes is census tracts, a geographic area designated by the US Census Bureau. Each tract is designed by the Bureau to contain a population of 3,000 to 8,000 people, who are relatively homogeneous with respect to socio-economic demographics.

The RUCA Codes are defined based primarily on population size and commuting behavior. Census tracts with high proportions of residents who work in the local area are core tracts. Tracts that send significant shares of its residents to the core are commuting tracts.

Applying this classification to the state of Oregon produces the rural and urban areas seen in Figures 4 and 5, from 2000 and 2010. Here again we see that some census tracts have changed their type over the last decade. 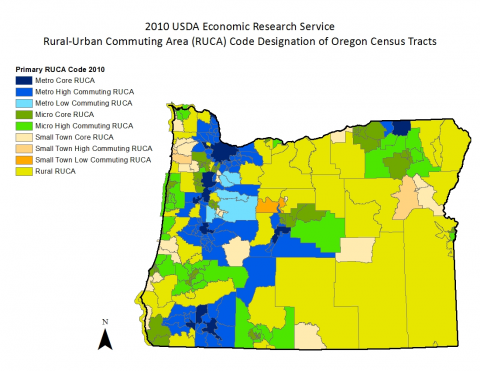