Rain, drizzle, mist and fog -- typical North Coast weather conditions. These do not bring fire to mind. Yet our coastal forests contain potential fire risks when warm, dry summers linger into the fall. Logging debris, dry coastal vegetation and careless campers contribute to the risk. In 2005, the Clatsop State Forest had 11 small fires, for instance.

Today's Tillamook State Forest is the product of a monumental reforestation effort undertaken in the 1950s and 1960s. More than 72 million seedlings were planted by hand -- many of them by school children and volunteers -- across the blackened landscape.

In August 1933, huge forest fires known as the "Tillamook Burn" destroyed over 250,000 acres of timber. The Tillamook Burn was the collective name for a series of wildfires that struck the northern Oregon Coast Range mountains.

Smoke rolled and billowed above the flames. It formed, for two days, a pillar and mushroom that stood clear and white and terrible five thousand feet above the forest. Presently ashes were drifting through the screens of the windows in Portland homes, fifty miles away. The wind over the fire rose at last to a hurricane and the noise was greater than the sea pounding the Oregon shore. It rumbled and thundered and was marked by the deep booming of ancient trees uprooted by the gale and crashing down.
- Stewart Holbrook, American Mercury (1946) 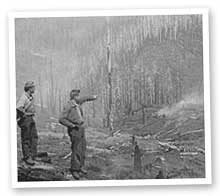 The fires brought profound environmental, economic and social change to Northwest Oregon. The total economic loss was estimated to be in excess of 600 million dollars.

[Reforestation] can never compensate for that tragedy we call the Tillamook Burn, as somber a sight as to be viewed this side of the Styx. There they stand, millions of ghostly firs, now stark against the sky, which were green as the sea and twice as handsome, until an August day of 1933, when a tiny spark blew into a hurricane of fire that removed all life from 300,000 acres (1,200 km) of the finest timber even seen. It was timber, too, that had been 400 years in the making. It was wiped out in a few seething hours which Oregon will have reason to remember well past the year 2000.
- Stewart Holbrook(1948)

Oregon Department of Forestry. An Oregon Legend: From Ashes to Forest. Salem, OR: The Deparment. [n.d.].