An upland (as opposed to riparian or bottomland) forest along Oregon's Central Coast has a closed canopy dominated by Douglas-fir and bigleaf maple. The current tree cover in the typical upland forest is second or third growth, though some old growth forest remains. . 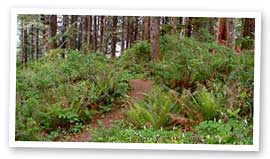 The thick and varied forest canopy catches rain and collects dew. Tree roots hold the soil of steep slopes in place, and shelter mosses, lichens and other understory vegetation. Branches shade and cool upland streams essential to native fish including salmon. Upland forests provide habitat for hundreds of species of birds, mammals and reptiles and amphibians many of which will only live in this type of forest. 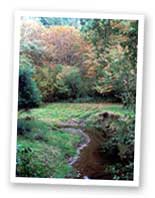