The land use and land cover patterns that appear circa 1990 are the results of both natural and cultural influences. Since the mid 19th century, EuroAmerican settlement of the Willamette Valley has played a major role in establishing the patterns seen in Map 24. Settlers were attracted to the Willamette Valley's mild climate, fertile soils, and abundant natural resources. People settled near major rivers for transportation, on hill slopes for safety from recurrent valley floods and access to fuel and building materials, and in open areas for livestock forage and easier clearing of the land. 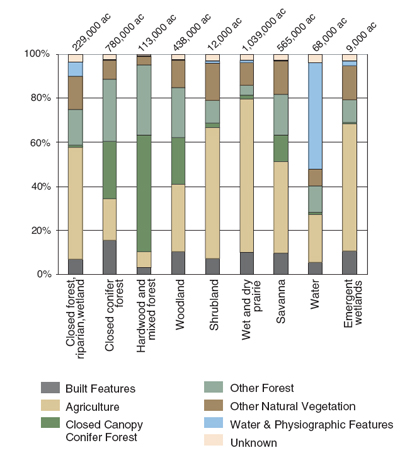 Establishment of communities and transportation networks as well as the clearing of forests and draining of wet prairies for commercial scale agriculture have resulted in significant changes in the landscape. Figure 94 shows the extent of this conversion in the Willamette Valley ecoregion. The land cover types listed on the horizontal axis are circa 1851, with the colored bar above each 1851 type representing conditions circa 1990. A notable example is an 80% conversion of the land cover area circa 1850 in wet and dry prairie to built and agricultural land use circa 1990.

Since 1973, land use regulations have resulted in the expanse of fields and the forested landscapes that give the valley its character. Since subdivision of rural parcels has been slowed, road density has been kept lower than it would otherwise have been. Prohibition or strict control on residential development in resource areas has reduced the impact of noise, light, pets, pollution and other human interference to wildlife that usually accompany residential development. Some crops mimic the vegetative structure of the native habitats that they replaced, e.g., grass seed and pastures in native prairie areas, and are used by wildlife. All of these factors have allowed both wildlife and patches of native vegetation to persist in the Willamette River Basin. 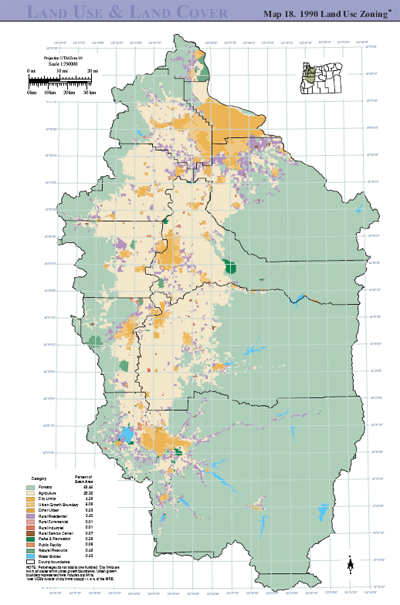 Map 18 depicts the state's Land Conservation and Development Commission (LCDC)'s summary classification of the zoning in the Willamette River Basin. Land use zoning determines the types of activities that can occur on the land, such as density of housing or timer harvesting activities. While an area may be zoned for a particular type of use, some or all of that area may not be used as zoned (an example would be an area zoned for residential use that is still partially in agricultural use). As such, the zoning designations the map portrays reflect both current conditions and anticipated conditions.