The Alsea Bay estuary is designated as a Conservation estuary under the Oregon Estuary Classification system. The geomorphology of the area is that of a Drowned River Mouth estuary. 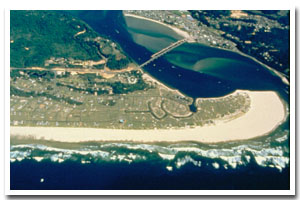 The Alsea Bay estuary is located in Lincoln County. Principal industries of the county are lumber, fishing, agriculture and tourism. The county seat of Newport is home to Oregon State Universitys Hatfield Marine Science Center, the Oregon Coast Aquarium and a busy commercial fishing fleet. By 2006, Lincoln County had grown to 44,500 representing an increase of 12.7% over 1990, but less than 1% since 2000.

The Department of Oregon Geology and Mineral Industries maintains a tsunami inundation map for Alsea Bay. As the area is low lying, the city of Waldport has a detailed emergency plan.