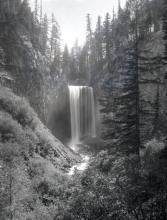 The Gifford Photographic Collection consists primarily of photographs taken by four Gifford Family photographers: Ralph I. Gifford; his father, Benjamin A. Gifford; his wife, Wanda Gifford; and his son, Ben L. Gifford. The collection also includes motion pictures filmed by Ralph I Gifford, some photographs for whom the photographer is not identified, images by other photographers, and documentary materials. The Gifford Family's photographic work began in about 1890, when Benjamin A. Gifford emigrated to Portland, and continued into the 1950s. The collection documents Oregon landmarks and scenic views on the Oregon coast and in the Cascade Mountains, Willamette Valley, and central and eastern Oregon; agriculture in Oregon; and Native Americans, especially of the Columbia Plateau.