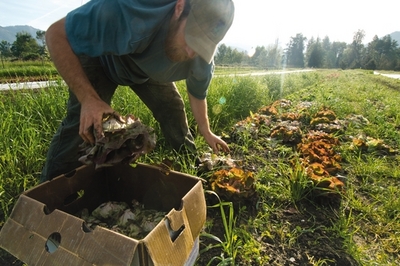 The young couple stood on a grassy hill and looked down on the farm they and family members had just purchased. Below them, their 37 acres edged along a creek, tucked between two forested slopes, with the hills of southern Oregon in the distance. In their minds Chris Jagger and his wife, Melanie Kuegler, saw an organic vegetable farm. But what they really saw were tired, old barns and a beaten-down pasture. When the wind blew, dust swirled everywhere. 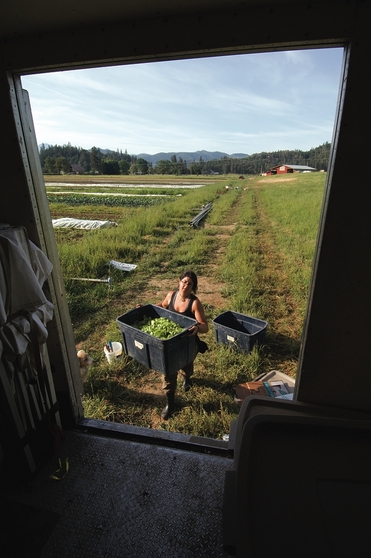 "It was a mess. We knew we had so much work ahead of us," Jagger recalls.

That was six years ago. Today, under the name Blue Fox Farm, they grow up to 50 different certified organic vegetables on about six acres of their farm near the hamlet of Applegate. Kuegler's sister and brother-in-law, David and Valerie Kennedy, raise sheep, goats, and ducks in a separate enterprise on the farm.

None of them grew up farming.

As young, first-generation farmers, they're a minority in a graying industry. The average age of principal operators on Oregon farms and those across America is 55, according to the 2002 Census of Agriculture. Nationwide, the percentage of principal farm operators under the age of 35 dropped from 16 percent to 6 percent between 1982 and 2002, the census reported.

Despite the nationwide decline, some young city slickers see a future in farming. They might not have the experience of their elders but they've got energy and passion. They've got blogs, they're having babies, and they've traded their Calvin Kleins for Carhartts. They've also got Oregon State University on their side.

When Jagger, 34, and Kuegler, 31, need help, one of the experts they turn to is Melissa Matthewson, a faculty member in OSU Extension's Small Farms Program.

"She's taken the time to investigate things for me," Jagger says. "In the middle of the summer, I don't have time to stop and look up a question, so it's nice to be able to call her and say, 'I've got this bug. Do you have any idea what it might be?' A couple of hours later she calls me back with an answer."

Matthewson and her colleagues in the Small Farms Program offer education and guidance for farmers -- young and old -- across Oregon. Their Web site includes an online newsletter, a list of upcoming workshops and farm tours, and dozens of publications on livestock, crops, pasture, soil, and marketing.

Farmers also have the opportunity to learn more about agriculture by partnering with researchers on specific on-farm projects. Blue Fox Farm became part of an organic potato research project that OSU spearheaded in 2005. It brought growers and researchers together to test different practices in the field and share their results.

"We got to see the test results, for example with nitrogen testing," Jagger says. "We grew a test plot using no added nitrogen, and our yield didn't change. It showed us that potatoes don't need as much nitrogen, which is a money-saver for us."

Acting on advice from OSU potato specialists, Jagger learned that when he reduced the spacing between his potato plants, his spuds were more uniform-sized and more marketable. The research project provided Jagger with new information and a new network of OSU expertise. "I feel confident I can shoot off an e-mail or call someone on the OSU team and know that I can get a response," he says.

In return, Jagger is tireless at sharing his own knowledge. He has helped Matthewson design Extension courses on labor management and business planning, and he has offered advice on cover crops to grow at the OSU research center in Central Point. "He's definitely become a leader in the ag movement down here," Matthewson says.

Another young leader is Chris Overbaugh. For him it all started in 1995 when he needed money and Winter Green Farm needed bodies. He had just graduated from college and didn't know a thing about farming. Before he knew it, Overbaugh was tossing tons of burdock roots into a spinning vegetable washer and earning minimum wage at the farm in the tiny western Oregon hamlet of Noti.

That was 13 years ago. Now he's a "damn good farmer," says Wali Via, a co-owner of Winter Green Farm. So good that this year, the four farm owners made Overbaugh and his wife, Shannon, partners in the business.

Like Jagger, Overbaugh participated in the OSU potato research project and has consulted with other research and Extension specialists over the years, gaining advice ranging from marketing strategies to flea beetle control. OSU horticulturalist Ross Penhallegon has been a big help, according to Overbaugh. "When we've had problems in the field, we've asked Ross to identify the culprit. Sometimes he stops by our farm on his way home and I say, 'Ross, come look at this.' When we were having problems with our greenhouse tomatoes he helped us identify the fungus."

Gabrielle Rysula and Chad Hahn didn't have any farming experience before they quit their jobs as line cooks in Chicago and moved to Grants Pass to farm part of a 12-acre parcel owned by parents of a friend. Matthewson recalls meeting Hahn, 26, for the first time. He was standing near a 1946 tractor and throwing a ball for his dog when she drove up. She noticed the tattoos, the hooded sweatshirt, the baggy pants.

Her impression quickly changed. This guy has a head on his shoulders, she thought after listening to him outline his goals for the farm. "He seemed like he had done a lot of research," she says. Still, she drove away wondering if she'd ever hear from him again. That sometimes happens. Wannabe farmers, perhaps intimidated by the dose of reality she gives them, sometimes just disappear. 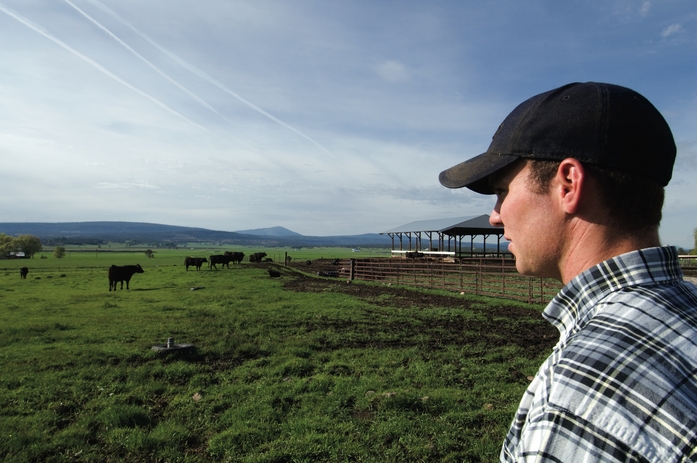