Mudflats are usually found around estuaries and other sheltered coastal areas where wave action is low and sediments are deposited. The sediments consist mostly of silts and clays with a high organic content. Toward the mouths of estuaries, where salinity and wave energy are higher, the proportion of sand increases. 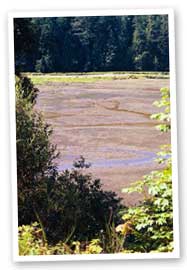 Mudflats are intimately linked by physical processes to, and may be dependent on, other coastal habitats such as soft cliffs and salt marshes. They commonly appear in the natural sequence of habitats between subtidal channels and vegetated salt marshes. In large estuaries they may be several miles wide and commonly form the largest part of the intertidal area of estuaries. However, in many places they have been much reduced by urbanization.

Mudflats are characterized by high biological productivity and abundance of organisms, but low diversity with few rare species. The surface of the sediment is often apparently devoid of vegetation, although mats of benthic microalgae are common.

Mudflats, together with other intertidal habitats, support large numbers of predatory birds and fish. They provide feeding and resting areas for internationally important populations of migrant and wintering waterfowl, and are also important nursery areas for flatfish.

An estuary is a body of water formed where freshwater from rivers and streams flows into the ocean, mixing with the seawater. Estuaries and the lands surrounding them are places of transition from land to sea, and from freshwater to saltwater. Although influenced by the tides, estuaries are protected from the full force of ocean waves, winds, and storms by the reefs, barrier islands, or fingers of land, mud, or sand that surround them.

From the Columbia River south to the Salmon River, the coastal mountains are a complex mix of sedimentary and volcanic rocks. Two estuaries -- Nehalem Bay and Tillamook Bay -- are relatively large by Oregon standards and have large watersheds. Other estuaries of the north coast -- the Necanicum River, Netarts Bay, Sand Lake, Nestucca Bay, and Salmon River -- are small and drain smaller watersheds. Netarts Bay and Sand Lake, with very small watersheds and limited freshwater input, essentially are saltwater lagoons.

South of the Salmon River are Siletz Bay, Depoe Bay, Yaquina Bay, Alsea Bay, and the Siuslaw River bay. The watersheds of these estuaries are moderate in size, except for tiny Depoe Bay. These estuaries have large areas of salt marsh, eelgrass, and tidal flat habitat.

The sheltered waters of estuaries are home to countless plants and animals that like to live in water that is part fresh and part salty. Examples include crabs, ospreys, and seagrasses. Myriad fish and shellfish, such as shrimp and salmon, live in estuaries at some point in their life. Estuaries protect water quality by filtering out dirt and pollution. In addition, estuaries and the land surrounding them are places where people live, sail, fish, swim, and bird watch. As a result, estuaries are often the centers of our coastal communities.

Estuaries face a host of common challenges. Because we love and depend on the water, more than half of the people in the United States live within 100 miles of the coast, including on the shores of estuaries. And more and more people are moving to these areas. Coastal communities are growing three times faster than counties elsewhere in the country.

Unfortunately, as more people flock to the shore, we are upsetting the natural balance of estuaries and threatening their health. We endanger our estuaries by polluting the water and building on the lands surrounding them. These activities can contribute to unsafe drinking water, beach and shellfish bed closings, harmful algae blooms, declines in fisheries, loss of habitat, fish kills, and a host of other human health and natural resource problems. 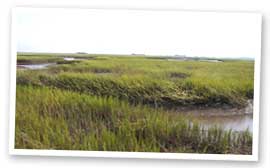